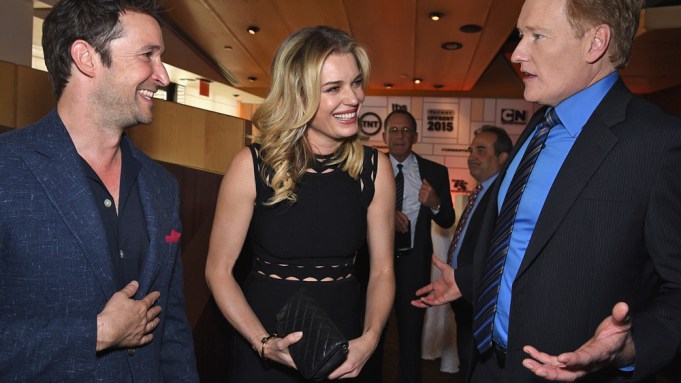 The curtain came down on the 2015 upfronts in the wee hours of Friday morning when the last hardy souls cleared out of CW’s thank-god-it’s-finally-over bash at Park Avenue Spring in Gramercy Park.

TV’s marathon week seems to grow longer every year, with more parties and related events added to the already grueling schedule of network programming presentations. As always, there were highlights, lowlights and head-scratching moments to remember. To use a metric that everyone in showbiz can understand — awards shows — here’s our rundown of the week that was.

Best goofy video to start a presentation: Stephen Colbert and Leslie Moonves at CBS. A couple of hams.

Best use of talent to sell a show: Mike Epps, of “Uncle Buck,” and Ken Jeong, of “Dr. Ken,” at ABC. The brief reunion of “Hangover” actors drew big laughs.

Best sidekick: Jimmy Kimmel‘s 10-month-old daughter, Jane. Even the most hard-hearted media buyer had to “awwwwww” at the sight of this cutie at ABC.

Best use of grilled cheese: CW supplied their Thursday night bash with food throughout the afterparty, but surprised the late-night crowd (including the cast of “Containment” tearing up the dance floor) with a buffet of french fries, mini sliders and cheesy goodness, served after midnight.

Best free Wi-Fi: NBCUniversal Cable at Jacob Javits Center. There’s gotta be a reason to make the trek to a spot where even the subways don’t go.

Best song: Dolly Parton’s “Coat of Many Colors” at NBC.

Best impromptu dance party: Oxygen’s “Prancing Elites” surprised partygoers with not one, but two routines during NBCUniversal’s clubby after-party, which welcomed the sounds of the night’s DJ, Questlove.

Best use of a prospective First Husband to impress advertisers: President Clinton’s address at Univision.

Best heartfelt thank-you: Gina Rodriguez thanking advertisers for supporting “Jane the Virgin” at CW: “It may just be money to you but it is our dreams.”

Best use of confetti: NBCUniversal Cable ended its Thursday afternoon presentation on a festive note.

Best use of talent to pitch wonky advertising technology stuff: ABC’s video with “Black-ish” moppets Marsai Martin and Miles Brown explaining how the network will offer cutting-edge data to buyers.

Best scripted off-the-cuff remark by a network chief: Fox’s Dana Walden, who noted that in all her years of attending upfronts as a program seller with partner Gary Newman, “We never said to ourselves, ‘I wish these executive speeches would go on a little longer.’ “

Best tap dancing around the elephant in the room: The absence of any reference to NBC News at NBC.

Best use of street theater: “Scream Queens” cheerleaders with bloody knives stuck in their backs passing out ice cream outside the Beacon Theater before Fox’s presentation.

Worst overuse of a joke: ABC’s dependence on Shonda Rhimes.

Worst idea for a joke: NBCUniversal’s Mike Rosen saying that he’d been selling Spanish-language TV for so long that he should change his name to Miguel Rosario — which played complete with a title-card slate on the big screen behind him at NBCUniversal Hispanic Group’s presentation.

Worst talent wrangling: CW hustling Ian Somerhalder past a short line of fans waiting for autographs at the back entrance of City Center when he clearly wanted to connect with them.

Worst pacing of presentation: (tie) Turner and NBCUniversal Cable. You have a lot of networks and programming, we get it.

Weirdest moment of the entire week: Miley Cyrus at Adult Swim. The smell of desperation was stronger than the joint she fired up.

Best reminder of why we love television: The Paley Center for Media’s Tribute to African-American Achievements in Television. This instrument can teach.

CORRECTION: An earlier version of this post reported that NBC stated “The Blacklist” was TV’s most watched drama. NBC said it was the most-watched drama on Thursday night.

(Pictured: The cast of “Empire” at Fox’s presentation)