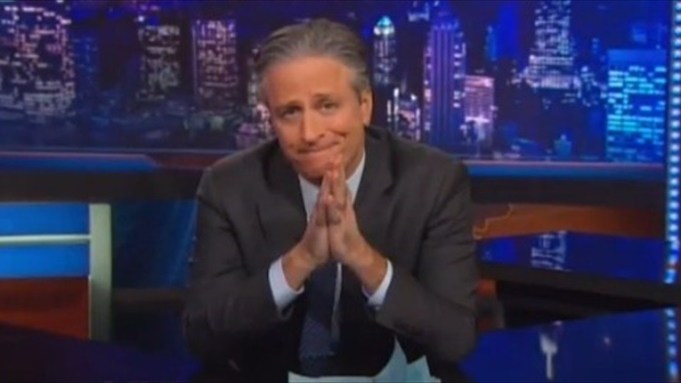 Late-night hosts Conan O’Brien and Jon Stewart took time out during their opening segments Wednesday night to call attention to the Charlie Hebdo murders that took place earlier in the day in Paris, a salute of sorts from one group of popular satirists to another.

Twelve people at the headquarters of the French satirical weekly were killed Wednesday in Paris during an attack by gunmen wearing hoods who also shouted Islamic phrases. The murders served as another reminder after the recent hacking at Sony Pictures in the United States — an act that delayed and tamped down the release of the movie comedy “The Interview” — that the right to free speech is not always guaranteed.

“In this country, we take it for granted it’s our right to poke fun at the untouchable or the sacred, but today’s tragedy in Paris reminds us, very viscerally, that it’s a right some people are forced to die for,” said O’Brien during this evening’s broadcast of “Conan” on Time Warner’s TBS.

On Comedy Central’s “The Daily Show,” host Jon Stewart appeared to struggle for words during the show’s opening minutes as he tried to pay his respects to the staff of the weekly satirical newspaper while denouncing the acts. “Our hearts are with the staff of Charlie Hebdo and their families tonight,” Stewart said, adding: “We know very few people who go into comedy as an act of courage.”

“Our goal tonight is not to make sense of this, because there is no sense to be made of it,” the host said. “Our goal is to keep going.” He eventually managed to pivot to a segment about Nazi cows.

Not every wee-hours program gave the subject prominent placement. Neither Jimmy Fallon or David Letterman addressed the tragedy in the opening segments of their programs – NBC’s “Tonight Show Starring Jimmy Fallon” or CBS’ “The Late Show With David Letterman” – Wednesday night.