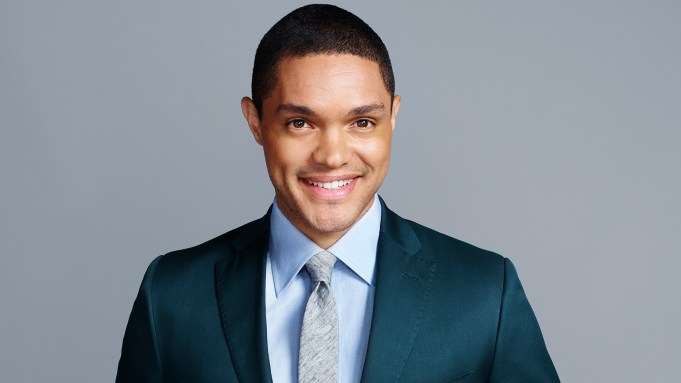 Trevor Noah spent his first four minutes as host of “The Daily Show” paying tribute to his predecessor Jon Stewart and acknowledging the debate that ensued over who should succeed Stewart at the helm of the Comedy Central franchise.

“I can only assume this is as strange for you as it is for me,” Noah said in his debut behind the “Daily Show” anchor desk. He acknowledged that Stewart’s voice was so authoritative that many viewers saw him as the patriarch of the “Daily Show” family that included the audience.

“Now it feels like the family has a new stepdad and he’s black. Which is not ideal,” Noah said.

Noah is known for taking on racial and social issues in his standup comedy routines. He did not shy away from those topics in his opening. He noted the discussion following Stewart’s decision to step down that the show should be turned over to a woman, but those who were offered the job turned it down. The same was true for the U.S.-born personalities who were approached by Comedy Central, he said.

“Once again a job Americans rejected is now being done by an immigrant,” he said.

At the very start, Noah stated flat-out that “this is surreal for me.” As a way of introducing himself, he told viewers “Growing up in the dusty streets of South Africa, I never dreamed one day I would have two things — an indoor toilet and a job as host of ‘The Daily Show.’ And now I have both. I’m quite comfortable with one of them,” he said.

Noah gave a heart-felt shootout to Stewart for “believing in me” and supporting his appointment as anchor. He vowed to work hard at the job in order to make sure Stewart doesn’t wind up “look(ing) like the crazy old dude who left his inheritance to some random kid from Africa.”

And then he closed the segment with a call-out to Stewart’s comments on his final broadcast on Aug. 6.

“Thank you for joining us as we continue the war on bulls—,” Noah said.