Continue to Variety SKIP AD
You will be redirected back to your article in seconds
Nov 10, 2015 2:13pm PT 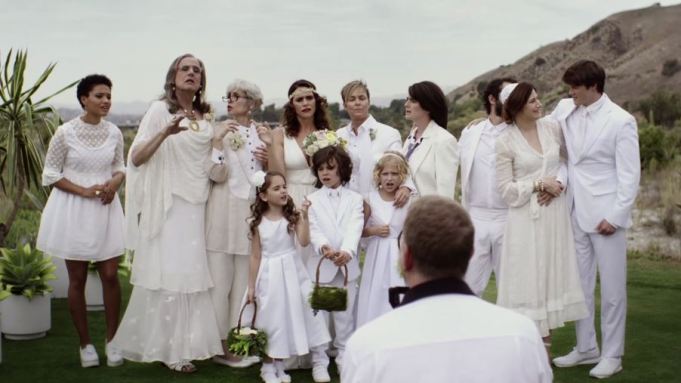 Wedding bells are ringing in the first teaser for “Transparent” Season 2, released Tuesday by Amazon.

The streaming service also changed the launch date, pushing it back to Dec. 11. Previously, the new season was planned to premiere on Dec. 4.

As reported in September by Variety, Anjelica Huston will also guest star in the sophomore season. “They have a lot of chemistry…palpable chemistry!” Soloway said about Huston’s character interacting with Jeffrey Tambor’s Maura. “It was palpable. I was directing them together and I was watching through the monitor.”

“Season two is wild! Now that the bubble wrap is off, it’s time for the whole family to transition,” said Soloway, the Emmy Award-winning creator of Transparent, who exec produces Season 2 with Andrea Sperling. “Our Pfeffermans realize they must give up their disguises, unspoken arrangements and secrets. By exploring their shared history and legacy, they come to understand that you can’t go forward without knowing where you come from. Ultimately, everyone will open their hearts, advertise their desires, and test those notoriously wobbly boundaries as each Pfefferman tries their hardest to come out — as themselves.”

Along with Tambor, core cast members Judith Light, Amy Landecker, Jay Duplass and Gaby Hoffmann all return to Season 2, which features Sarah (Landecker) and Tammy’s (Hardin) nuptials, as teased in the video above. The new episodes will also revolve around Maura, now out of the closet, as she discovers the hardest part of her transition is still ahead and faces some tough personal decisions about her future, plus Josh (Duplass) and Rabbi Raquel (Hahn) who navigate their new relationship.

Far ahead of Season 2, “Transparent” was also been renewed for a third season.