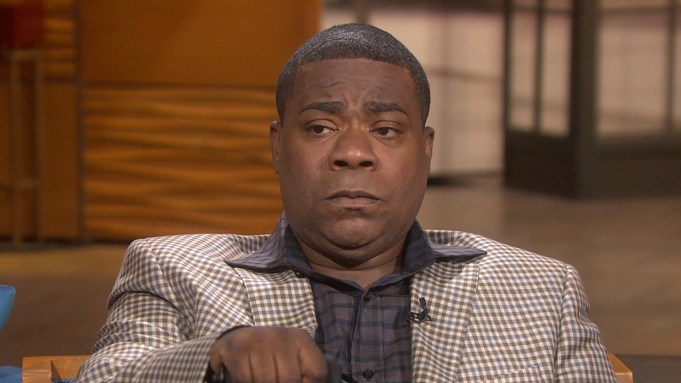 A year after he was seriously injured in a car crash that took the life of his friend, Tracy Morgan said he intends to return to the comedy biz once he’s completely recovered.

Morgan was tearful in recalling the circumstances of the accident that killed his longtime friend and fellow comedian, James “Jimmy Mack” McNair. “Bones heal,” Morgan told “Today” anchor Matt Lauer. “The loss of my friend will never heal.”

Morgan suffered brain trauma, a broken legs and other injuries in the June 7, 2014, crash on the New Jersey Turnpike when his bus was rear-ended by the driver of a Walmart truck, who was found to be at fault. The retail giant recently reached a settlement with Morgan and also paid a reported $10 million to McNair’s family. Clearly distraught, Morgan called McNair “a loving man, a good man, a warm man.”

Morgan recalled his last exchange with McNair involving a joke about former L.A. Clippers owner Donald Sterling that McNair wrote for Morgan. Morgan, McNair and others were returning to New Jersey after a show in Delaware when the accident occurred. Morgan recalled performing the Sterling joke at the show, to a big response from the crowd.

“The last time I saw him he was standing there (offstage) laughing,” Morgan said.

Morgan said he has “good days and bad days” and still suffers from memory loss, headaches and nosebleeds. “I’m not 100 percent yet,” he said, pointing to a few scars on his head. “When I’m there you’ll know it.”

Morgan said he does not remember the accident, only the experience of waking up two weeks later from a coma with friends and family members around him. He said the support of friends like his “30 Rock” co-star Tina Fey have helped keep his spirits up.

Lauer noted the eerie circumstance of the night of the crash being a rare time when Morgan performed on the road without bringing his fiancé, Megan, and baby daughter along. His daughter was 10 months at the time of the accident. “She wouldn’t have made it,” he said.

Morgan, who appeared with his lawyer, Benedict Morelli, made a point of expressing his gratitude to all the medical workers at various hospitals where he has been treated during the past year, as well as the police, paramedics and passersby who helped his group on the night of the crash. He also extended his appreciation to Walmart for taking “responsibility” for the crash. The driver of the truck was found to have been awake for nearly 24 hours prior to the accident.

“I’m happy Walmart stepped up to the plate in a tremendous way,” Morgan said. Morelli told Lauer that Walmart CEO Doug McMillon had reached out to him and intends to apologize personally to Morgan.