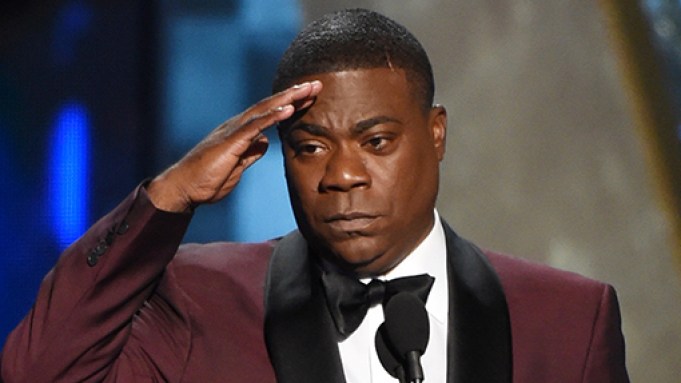 Morgan made a surprise appearance at the end of the broadcast, when he took the stage to present the award for outstanding drama series. He spoke of recovering from the traumatic brain injury he suffered from June 2014’s six-vehicle crash on the New Jersey Turnpike involving his limo and a Walmart-operated tractor-trailer. Three others were also injured.

“When I finally regained consciousness, I was ecstatic to learn I wasn’t the one who messed up,” Morgan said. “Only recently I’ve started to feel like myself again.”

On Monday, David Jay Glassman, the attorney for Kevin Roper, the Walmart driver involved in the crash, condemned the speech, arguing it would prejudice court decisions against his client.

“This is exactly what happens when a prosecutor and a judge allow parties to dictate what’s important and control the proceedings,” Glassman said in a statement. “Clearly the last thing on the mind of the Middlesex County Prosecutor’s Office and the New Jersey Federal District Court Judge who permitted Morgan’s civil case to supersede the pending criminal proceedings, was Mr. Roper’s constitutional rights, including the right to have his guilt or innocence decided in a courtroom, as opposed to by the national media or by way of comments made by Mr. Morgan during the nationally televised 67th Annual Emmy Awards. While the violations of Mr. Roper’s rights continue unabated, Mr. Morgan has confirmed that his monetary goals have been realized and his personal as well as professional recovery is well underway. Unfortunately, the same cannot be said about my client, Kevin Roper, who awaits indictment, while his constitutional rights were discarded in favor of an unprecedented rush to judgment and material for comic relief.”

Morgan and Walmart reached a settlement over the accident in May, but the National Transportation Safety Board concluded in August that the crash was caused by Roper’s fatigue (he had allegedly been awake 28 hours and worked almost 14 at the time of the accident) and that he was speeding. He was charged with death by auto and four counts of assault by auto, and has pleaded not guilty to the charges.

Backstage in the press room after his speech Sunday, Morgan said that his speech was written “by me, [manager] Lewis Kay and Jeff Stilson.”

“We just sat down and it just came from the heart,” he told reporters. “I just wanted to say to my peers and my comrades in TV land thank you very much.”