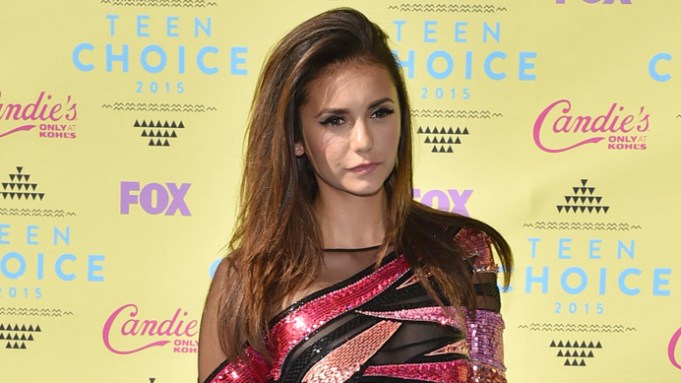 Nina Dobrev will not be returning to “The Vampire Diaries” for its seventh season on the CW this fall, and the star bid adieu to the series Sunday night at the Teen Choice Awards, delivering a heartfelt speech to her fans.

“The last few months have been a big change for me,” Dobrev said during her acceptance speech for Choice TV Actress: Sci-Fi/Fantasy. “Change. It’s a scary word, or I used to think that, because it meant new beginnings. New beginnings with a future that was unknown. But change is necessary — necessary for you to grow up and learn and to better yourself, because everything in life comes to an end.”

Dobrev, who starred on the hit show as Elena Gilbert for six seasons, also thanked creators Julie Plec and Kevin Williamson up onstage. “They changed my life with this role,” she said.

She continued, “Just like Elena, I started the show as a young girl, and together we grew up. We’ve grown up, and over the last six years, we’ve become women. These were six incredible years that I’ve had the pleasure of sharing with all of you guys. I wouldn’t be here with you.”

“As this chapter of my life comes to an end, I look back and smile,” Dobrev said to the crowd full of teens at USC’s Galen Center in Los Angeles, where the annual Fox show, co-hosted by CW’s “Jane the Virgin” star Gina Rodriguez, was held. “These were six incredible years that I’ve had to pleasure of sharing with all you guys…change is coming, so hold on and enjoy the ride.”

Last week, CW president Mark Pedowitz told Variety and other reporters at the Television Critics Assn. summer press tour that Dobrev is welcome back on the show if she ever wants to return. “We would have loved Nina to stay,” he said. “She did a great job the six years she was on…As you know, her character is sound asleep at the moment.”

“The Vampire Diaries,” without Dobrev, returns with Season 7 on Oct. 8.