‘The Muppets’ Q&A: Behind the Scenes of Miss Piggy’s Late-Night Talk Show 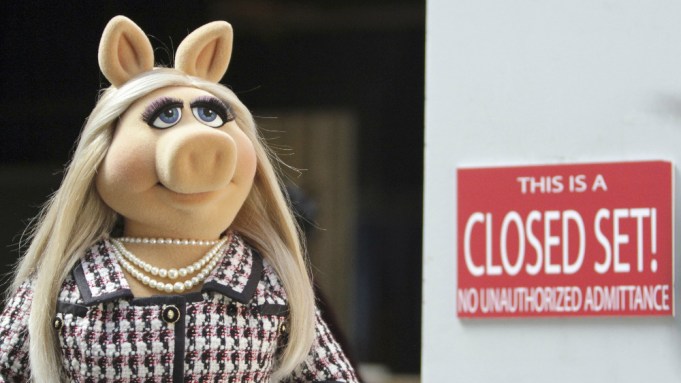 “The Muppets” are back and ready to take over TV once again — well, if Miss Piggy doesn’t steal the entire spotlight.

In ABC’s new mockumentary-style comedy, the furry friends’ personal lives and relationships (or lack thereof for former longtime couple Kermit and Piggy) are on full display, as cameras follow the characters at home and at work, which proves to be interesting when the office is the set of Miss Piggy’s new late-night talk show.

The reinvented, modernized “Muppets” series features a show-within-a-show format, including scenes from the fictional “Up Late With Miss Piggy,” for which Kermit the Frog is the exec producer, The Great Gonzo is head writer, Fozzie Bear is the warm-up comic sidekick, Sam the Eagle is head of network broadcast standards and practices, Scooter was Kermit’s assistant and has been promoted to talent coordinator and, of course, Miss Piggy is the host.

The one-pig-cast and crew of “Up Late With Miss Piggy” talk to Variety in this exclusive “exec sesh” about the challenges of producing a nightly show, the segments viewers can expect, the late-night television landscape, and of course, behind-the-scenes secrets.

Why is Miss Piggy the perfect late-night host?

KERMIT THE FROG: A late-night host needs to be a larger-than-life personality and, let’s  be honest here, Miss Piggy is larger than life in every sense of the word.

KERMIT THE FROG: I have to say that, as always, it’s absolutely wonderful working with Miss Piggy.

THE GREAT GONZO: He has to say that because she’s sitting at this table with us.

What are the challenges of working on a nightly show?

KERMIT THE FROG:  The pace is non-stop. There’s no time for taking a deep breath and figuring out the best way to do something.

SAM EAGLE:  Trust me, they rarely choose the best way to do something.

FOZZIE BEAR: My biggest challenge is coming up with new jokes.

FOZZIE BEAR: Not good so far. But I got a lot of old jokes if anybody wants to hear them.

MISS PIGGY: I don’t know what the big deal is. I show up, go out on stage, nail another incredible performance and head home. To be honest, it’s really not all that much work.

Kermit, what is the biggest challenge of being an exec producer of a major show?

KERMIT THE FROG: I face the same challenge every executive producer in town has to deal with — the hectic pace, the crazy personalities, the folks in the suits, the complaints about craft services. And then, to top it off, I have to work with my ex-girlfriend. It’s not that easy being an EP.

Is everything pretty tame backstage or is there any behind-the-scenes drama with so many different personalities?

KERMIT THE FROG:  Tame is not a word we use a lot around the Muppets.

SCOOTER: Especially when Animal is off his chain.

KERMIT THE FROG: Things can get pretty crazy backstage.

MISS PIGGY:  I try to stay in my dressing room, but sometimes, one can’t help but diving in and mixing it up.

MISS PIGGY:  Of course, I said it.

KERMIT THE FROG: On “The Muppets,” you’ll get to see what happens when we all dive in and mix it up while making “Up Late With Miss Piggy.”.=

SCOOTER: They see all of our private lives.

MISS PIGGY: Yes, but they’re only going to really care about mine.

Kermit and Piggy, I hate to ask a personal question because we are Variety, but your split has probably been tough on the flow of the show. Has it been difficult to maintain professionalism working together, after your public breakup?

KERMIT THE FROG: Yes. It has always been difficult maintaining professionalism with Miss Piggy, but this show takes it to the next level. I’d say we’ve gone from mildly problematic to incredibly impossible.

MISS PIGGY: No matter what was going on in our relationship, Kermit and I — but especially moi — have always been true professionals. We have a job to do and we do it. Now that we’re no longer romantically involved, it’s easier to work together. Now I can blame him and don’t have to worry what he thinks. After all, he works for me!

Kermit, how has your experience been working with your new girlfriend, Denise?

KERMIT THE FROG: Denise is a marketing executive with the network. She’s very sweet and we get along great. We try not to flaunt our relationship in front of Miss Piggy. That’s out of respect for Miss Piggy’s feelings and Denise and my safety.

Miss Piggy, is it difficult to work in the same building, as Kermit and Denise?

MISS PIGGY: I am a strong, independent woman and I don’t let such things affect me. Who cares that he’s dating her and she works in the building. Why would that bother me!?  It doesn’t! Not even a little. You can see that, can’t you? Are we done here? Can I go. Oh wait, this is my dressing room. I’ll stay, you leave!

Sorry to offend you. Speaking of strong women, which you certainly are, what is the significance of being the first female late-night host?

MISS PIGGY: While I’m incredibly groundbreaking in everything I do, that’s not exactly true. The first female late-night host was my dear friend and “The Muppets Take Manhattan” co-star, the late Joan Rivers. Joan and moi were friends from day one. We always loved and respected each other. I miss her and I will do my very best to make her proud.

Should there be more women in late-night?

MISS PIGGY: Nope. Now that I’m here, one woman in late-night is more than enough.

What sorts of segments can we look forward to on the show?

MISS PIGGY: Entertaining ones. Next question.

What other late-night shows have you looked to for inspiration? Have you gotten advice from anyone?

MISS PIGGY: I recently sat down for an interview with Jimmy Kimmel.

KERMIT THE FROG: I was there, too.

MISS PIGGY: Oh, you were? I didn’t notice — anyway, Jimmy Kimmel was very complimentary and encouraging. He even asked moi for advice.

KERMIT THE FROG: I don’t remember it that way.

MISS PIGGY: I got final edit on the sit-down. Trust me, that’s the way it comes out on air.

KERMIT THE FROG: I bet it does. In any case, we’re eager to take advice from Stephen Colbert, both Jimmys and anyone else in the talk show world.  It’s a small community and we all need to help each other.

What do you think about the new late-night landscape? Lots of new hosts out there.

MISS PIGGY: We welcome the competition.

MISS PIGGY: Well, maybe “welcome” is too strong a word. Let’s put it this way: We’re not afraid of anyone. Bring it!

KERMIT THE FROG: Piggy, you make it sound like a wrestling smack-down.

How will you differentiate yourself from the competition out there?

KERMIT THE FROG: We’re the only show hosted by a pig.

Dream celebrity guest on the show?

MISS PIGGY: Oh, I’ve just begun to tap all my famous friends to be on my show — Reese Witherspoon, Elizabeth Banks, Josh Groban.

KERMIT THE FROG: The Hollywood community has really welcomed us with open arms.

THE GREAT GONZO: They better be really big arms.

THE GREAT GONZO: Nothing, nothing. Moving on.

Who is the house band?

SCOOTER: … And the rest of the group on who-knows-what.

Fozzie, what exactly does the role of warm-up comic sidekick entail?

FOZZIE BEAR: It entails warming up the audience before the show, then throwing in a joke when we’re on the air, and ducking when Miss Piggy throws the joke back. I’ve also discovered that when you’re Miss Piggy’s sidekick, you really do get kicked in the side — and sometimes the entails, too!

Gonzo, is Miss Piggy difficult to write for? Does she weigh in on the content, or does she just simply read the prompter?

THE GREAT GONZO: Piggy really throws her weight around before, durin and after the show. Coming up with great bits for her to do isn’t difficult. I mean, put a pig and a camera together, just add mud or tapioca and it’s a big ratings no-brainer. The tough part is convincing Piggy to dive in and look ridiculous. I’ve never had a problem doing that myself, but she’s got to be convinced. As for the prompter — she broke it the first night and we haven’t bothered fixing it.

Sam, as the head of standards and practices, how will you avoid inappropriate moments? 7-second delay?

SAM EAGLE: A 7-second delay? Are you out of your mind? I like a good 18 or 19 minute-delay, so I have time to go over the nonsense carefully before deciding whether or not it’s appropriate. Needless to say, it’s almost always inappropriate.

What challenges have you come across with broadcast boundaries from the network?

SAM EAGLE: The network likes what the Muppets are doing. I can’t understand that at all, but then again who can ever understand what networks are thinking.

Scotter, congrats on being promoted! Does Kermit still treat you like his assistant or is he a fair boss?

SCOOTER: Kermit is the greatest boss a guy can have. It’s wonderful being the talent coordinator for the show. I get to look for talent beyond just the Muppets, which is a good thing. Sometimes finding it around here can be tough.

Who is your dream guest to book on the show?

SCOOTER: Reese Witherspoon, Elizabeth Banks, Josh Groban — oh, hey, wait! Those are our guest on recent shows. And guess who booked them?! Me! I’ve learned that, in Hollywood, you really need to toot your own horn.

As talent coordinator, you deal with booking guests, but let’s be honest: who’s the biggest diva on set — Miss Piggy or the celebrities?

SCOOTER: I reserve the right to not answer that question on the grounds that Miss Piggy may read this interview.