Continue to Variety SKIP AD
You will be redirected back to your article in seconds
Sep 29, 2015 5:45pm PT 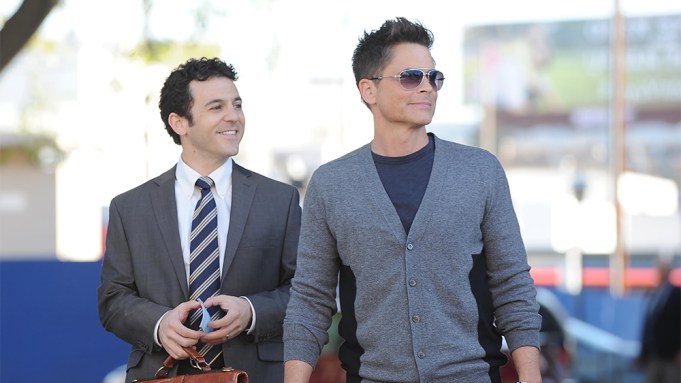 Fresh off of “Parks and Recreation,” Rob Lowe returns to TV Tuesday night with his own comedy vehicle “The Grinder,” a family sitcom, which he says, “You’ve never seen on television.”

“I was looking for something that was a worthy successor,” Lowe tells Variety of his new project. “Something that had its smarts and sort of quirky underdog sensibility, but I also wanted to do something that potentially had the chance to break out and I really feel like this was the script for me to have that chance.”

Playing a former TV lawyer, known as The Grinder on his popular legal drama, Lowe’s actor character Dean Sanderson finds himself back in his small hometown, after his hit show is cancelled. Despite not being a real lawyer, Dean believes he’s qualified to join his family’s real-life law firm, much to the dismay of his actual lawyer brother, played by Fred Savage.

“The concept is pretty original,” Lowe says, adding, “It’s a very unique world and it’s a larger-than-life character that I just love.”

Rounding out the cast is “It’s Always Sunny In Philadelphia” star Mary Elizabeth Ellis, who plays Savage’s on-screen wife, plus William Devane, who plays Savage and Lowe’s TV dad, and agrees the central character played by Lowe is a show-stopper.

“I think it fits right in,” Devane says of “The Grinder” finding its place in the television landscape, “Except it has a real elevated antagonist who comes through the door — he just happens to be part of the family.”

Though he’s playing the stereotypical actor type, Lowe says what attracted him to the project was the exact opposite sentiment.

“I love what I do. I do. But there’s a lot about what I do that I roll my eyes about,” he admits. “I’ve observed a lot and probably been apart of a lot of things that you’re like, ‘Oy.’ And so to be able to lampoon that every week, but in a way that’s not inside, that’s not about Hollywood — it’s actually about a real family that’s living in Idado.”

Lowe continues, “I wouldn’t have been interested in this if it were a Hollywood show. What I like is that we use that as flavoring to make a traditional family show a little more reinvigorated, as a concept.”

On the same note, Ellis adds, “It’s mocking a thing that is very mock-able: the super serious self obsessed actor, while still having the heart of being a family comedy.”

Watch “The Grinder” cast’s full interview with Variety above.