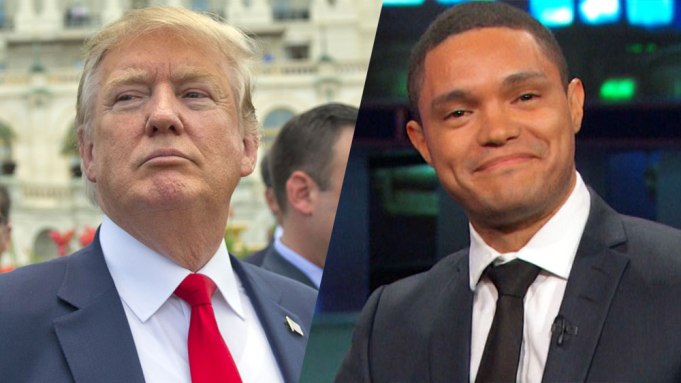 Trevor Noah is just one week away from taking over Jon Stewart’s desk on “The Daily Show” — and just in time to weigh in on the potential presidential candidates, namely Donald Trump.

Becoming fodder for all late-night shows, Trump’s daily headline-making comments are sure to become a major talking point for Noah’s monologues, as he makes his debut and shows audiences his savvy comedy skills when it comes to analyzing the 2016 campaign — an event, which was Stewart’s expertise.

“The best way I can explain is, it’s almost like skydiving,” Noah says of preparing to take Stewart’s seat on “The Daily Show,” beginning Sept. 28. “You have to walk up to the door, jump out and then pray that your preparation and parachutes are enough to stop you from hitting the ground and turning into a flat version of yourself.”

Telling Variety at this weekend’s at pre-Emmy Women in Film party that he wants Trump as a guest on his show and is already working on booking him, Noah said, “As much as Donald Trump is great for jokes and for what’s happening, it also puts up, like, a little cloud, and we don’t get to hear and see what the other candidates are all about.”

“So he’s good, but he’s bad,” Noah continued. “So I’ll enjoy the good, and then hopefully we’ll see him disappear and then it will get really interesting. Or he’ll be the next president.”

And if he is the next prez of the United States? Well, alluding to Trump’s comments about immigrants, Noah quips, “It’d be interesting to see if he’d let me stay.”

Watch Noah’s full interview above, in which he talks about Trump, diversity in Hollywood and his new “Daily Show” gig.