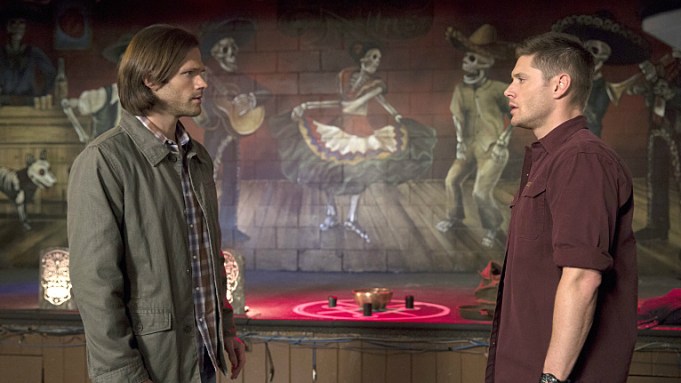 After unleashing a mysterious new enemy known only as “the Darkness” in “Supernatural’s” season 10 finale, Sam (Jared Padalecki) and Dean (Jensen Ackles) are set to face one of their biggest challenges yet in season 11, if the bloody new trailer is any indication.

According to Death (Julian Richings) — who imparted some helpful wisdom before the Winchesters finally (perhaps misguidedly) dispatched him last season — the Darkness is an ancient evil that pre-dates God, who was only able to defeat the mythical entity by locking it away. By freeing Dean from the Mark of Cain in May’s finale, the brothers inadvertently released the creepy Big Bad back into the world, and as a result, the bodies are about to start piling up when the CW series returns on Oct. 7.

Things are also looking grim for Castiel (Misha Collins), who was last seen attacking Crowley (Mark Sheppard) while under the influence of a spell in the season 10 finale. The new footage shows the angel looking a little worse for wear, but the same can be said for Sam, who tries praying to God for help in the new footage — before ending up in a wicked looking torture device.

“This year we’re going back to a more epic feel with a Big Bad and a quest for the brothers to unite on,” showrunner Jeremy Carver said of season 11’s new direction at “Supernatural’s” Comic-Con panel. “It’s a pretty special Big Bad we have this year. It’s pre-Biblical story that’s never been told, so I think it’s gonna be a really fun, epic feel, and the brothers are going to be really, really united in their need to take this thing down.”

As Variety‘s sister site TVLine first reported, “Supernatural” will also add Emily Swallow as Amara, a recurring “femme fatale who is both seductive and sinister” in the new season. Will she be the embodiment of the Darkness, a minion or a separate threat? We’ll find out when “Supernatural” returns on Wednesday, October 7.