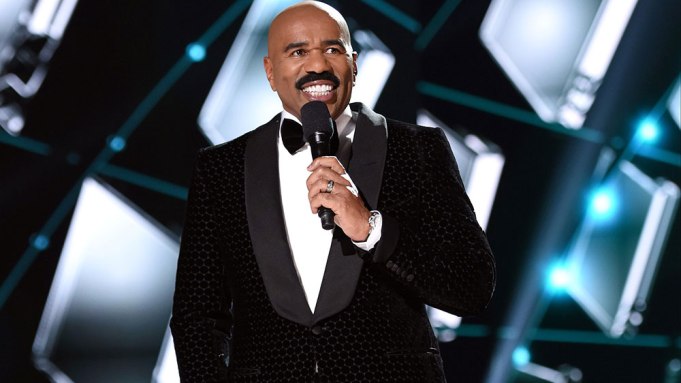 UPDATED with responses from Donald Trump and IMG

Steve Harvey has made a mistake — a very big mistake.

During Sunday night’s Miss Universe competition in Las Vegas, the host called out Miss Colombia Ariadna Gutierrez as the winner of the highly publicized competition. Except Gutierrez wasn’t the winner. Miss Philippines, Pia Alonzo Wurtzbach, was.

“OK folks,” he said. “I have to apologize. The first runner-up is Colombia.”

Harvey then announced that Wurtzbach was, in fact, the winner, and the camera then panned to the contestant, who looked visibly shocked after seeing Gutierrez’s celebration. The awkward moment was broadcast live on Fox and around the world, as the global pageant is broadly distributed in more than 190 international territories.

“This is exactly what’s on the card,” Harvey said, holding it up, clearly distraught. “I will take responsibility for this. It was my mistake. It was on the card. … Please don’t hold it against the ladies.”

Harvey went on to say sorry on his Twitter, writing, “I’d like to apologize wholeheartedly to Miss Colombia & Miss Philippines for my huge mistake. I feel terrible. Secondly, I’d like to apologize to the viewers at that I disappointed as well. Again it was an honest mistake.

“I don’t want to take away from this amazing night and pageant,” he went on. “As well as the wonderful contestants. They were all amazing.”

He tweeted a similar apology earlier, but misspelled the names of both countries, so the message was quickly deleted.

Unsurprisingly, Twitter exploded almost immediately with viewers taking jabs at Harvey’s expense. Some, however, defended him. Earvin Magic Johnson tweeted, “Steve Harvey made a mistake tonight, we’ve all made mistakes in our careers & lives. @IAmSteveHarvey keep the faith and keep going strong!”

The attention comes after Miss Universe went through some big changes earlier this year. Donald Trump and NBCUniversal owned the competition, but they parted ways after Trump’s presidential campaign garnered controversy, and WME/IMG took control of Miss Universe. Trump took time to revel in Harvey’s mistake, retweeting someone who wrote, “Where’s @RealDonaldTrump when you need em?”

UPDATE: On Monday morning, Donald Trump weighed in again via Twitter, reminding people that he sold the franchise earlier this year “for a record price” and claiming under his ownership, “This would never have happened!”

Very sad what happened last night at the Miss Universe Pageant. I sold it 6 months ago for a record price. This would never have happened!

“The excitement of live TV was evident last night on the Miss Universe stage with more than 10 million live fan votes tabulated. Unfortunately, a live telecast means that human error can come into play. We witnessed that when the wrong winner was initially announced. Our sincerest apologies to Miss Colombia Ariadna Gutiérrez Arévalo, Miss Philippines Pia Alonzo Wurtzbach, their families and fans. We congratulate Pia Alonzo Wurtzbach as Miss Universe 2015,” the company said in a statement.