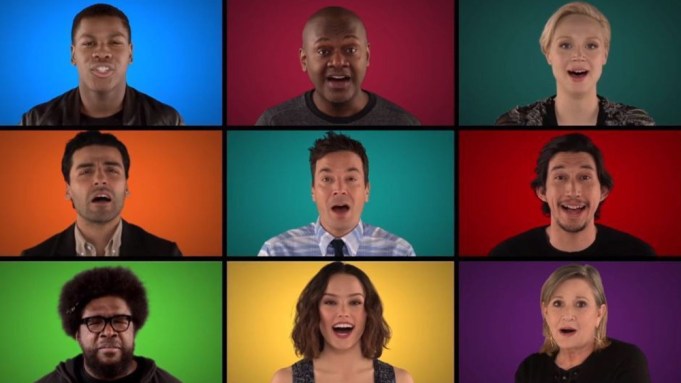 Be warned, the video above is sure to leave John Williams’ signature “Star Wars” theme music stuck in your head all day.

The cast of “Star Wars: The Force Awakens” joined forces with Jimmy Fallon and The Roots on “The Tonight Show” for a compartmentalized rendition (a la “The Brady Bunch”) of the classic score. Stars Daisy Ridley, John Boyega, Oscar Isaac, Lupita Nyong’o, Carrie Fisher and Harrison Ford hummed the a cappella medley, which Adam Driver and Gwendoline Christie added dark notes to with their transition straight into “The Imperial March.”

R2-D2, C-3PO, BB-8, Chewbacca and Stormtroopers lent their vocal talents to the group effort, while Mark Hamill was M.I.A., as usual.

The cast also took a crack at humming Williams’ iconic tunes from the franchise at Monday night’s world premiere.

“Star Wars: The Force Awakens” hits theaters on Friday and is expected to haul a record-shattering $210 million or more.