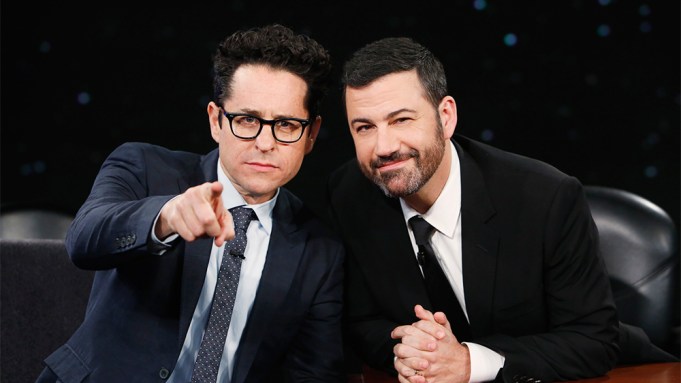 Last night’s episode of “Jimmy Kimmel Live!” was as star (wars)-studded as it gets.

Jimmy Kimmel hosted the cast of “The Force Awakens” — or as Kimmel called it, “the most anticipated sequel I think since the New Testament” — in a special “Star Wars” edition of the show that included interviews with cast members Carrie Fisher, Daisy Ridley, Adam Driver and John Boyega, and director J.J. Abrams.

“We have a couple more color corrections, but we’re done,” Abrams said about the film, which hits theaters on Dec. 18. “I can’t tell you the relief I feel.”

“It’s very early on in the movie, and these two characters, Rey and Finn, have just met,” Abrams explained. “He was a stormtrooper and abandoned his post and she is a scavenger in the desert of a place called Jakku, and the two of them have met and are now being pursued.” Ridley stars as Rey, while Boyega plays Finn.

The episode also featured several sketches, including one in which R2-D2 projected a hologram of Fisher, who said she’s sworn off the bun wig from “Star Wars Episode IV: A New Hope.”

In a pre-recorded segment, Harrison Ford ended his “feud” with Chewbacca, who once had an affair with his wife (as part of an ongoing “Jimmy Kimmel Live!” joke) — ultimately talking Chewie down from jumping off a roof.

The cast also discussed landing their dream roles and the secrecy of the shoot. The actors couldn’t take the script home to memorize their lines.

Boyega said he first shared the casting news with his agent before telling his dad. “Oh my God!” said Boyega, imitating his dad’s Nigerian accent. “You are in ‘Star Wars’? That is fantastic! I knew it! What is ‘Star Wars’?”

Driver didn’t even tell his wife that he was cast in the sci-fi franchise.

The cast then faced off against Arden Hayes, a 7-year-old “Star Wars” expert, in a trivia game judged by Abrams.