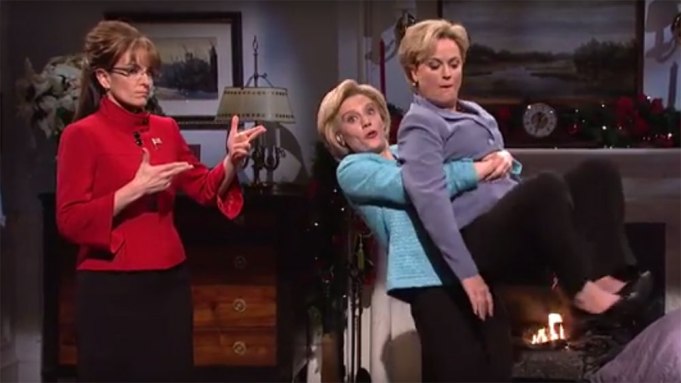 Tina Fey and Amy Poehler returned to their old stomping grounds this weekend, hosting “Saturday Night Live” as their new “Sisters” debuted in theaters. In the process, they brought back two of their biggest impressions: Sarah Palin and Hillary Clinton.

In the holiday-themed sketch “A Hillary Christmas,” Kate McKinnon’s impression of the Democratic presidential candidate was visited by the ghost of Hillary’s past — a.k.a., Poehler, Hillary Clinton from 2008.

Poehler’s “strong yet feminine” laughter wakes up McKinnon, and she updates the past Clinton on the current state of affairs. She’s up against Bernie Sanders, who she calls a “human Birkenstock.” McKinnon informs Poehler that “Mama’s got this presidency in the bag.”

Though 2008 Hillary is doubtful, when 2015 Hillary tells her that the leading Republican candidate is Donald Trump, they celebrate: “We’re going to be the president!”

However, the festivities are cut short when an old “friend” visits: Fey as Palin.

“Oh geez, looks like I went through time and space again,” says Palin. “Oh, what the heck! I landed in the bedroom of a lesbian couple.”

Palin proceeds to give Clinton advice — and opens some old wounds — in the return of the famous political impressions.

“Saturday Night Live” will return to NBC on Jan. 16.