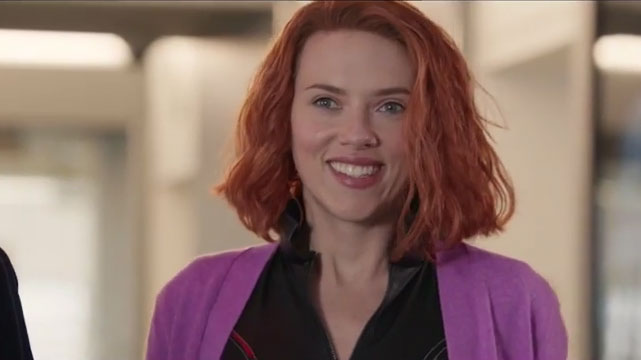 For everyone who’s been calling for a standalone Black Widow movie, don’t worry — “Saturday Night Live” and Scarlett Johansson have heard your cries, and they’ve answered them.

While hosting “SNL” this week, Johansson starred in a trailer for a new Black Widow movie, though it turns out that it’s not the same action-packed fare that her fellow Avengers like Captain American and Iron Man get. Instead, it’s a romantic comedy, and it’s packed with cliches.

“Does Marvel not know how to make a girl superhero movie?” asks the trailer, echoing the questions that so many have asked since Black Widow has flipped onto screens.

It turns out, the lethal, ass-kicking Natasha Romanoff is just a simple girl looking for love in the Big Apple. She’s a leather-clad intern at magazine Fashion Weekly who falls for the wrong guy (er, robot): Ultron.

Black Widow’s so distracted by her new-found love that’s she even putting ketchup on her cereal, but never fear — her best pals Nick Fury and Captain America are there to tell her just how wrong Ultron is for her. It becomes even more apparent when the villain blows up her place of work.

It’s no surprise “SNL” tackled the subject. As of late, Marvel has been under fire for leaving Black Widow, one of its only female superheroes portrayed on film, out of much of the “Avengers” merchandise. Even castmember Mark Ruffalo tweeted to Marvel, “We need more #BlackWidow merchandise for my daughters and nieces. Pretty please.”

Still, if a Black Widow standalone movie comes to fruition, hopefully it looks nothing like this.

“Avengers: Age of Ultron” opened this weekend to huge numbers, scoring the second-biggest domestic opening of all time.