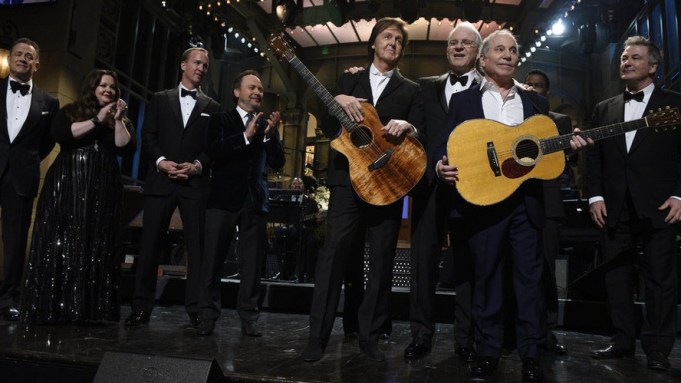 To kick off “Saturday Night Live’s” 40th anniversary special Jimmy Fallon and Justin Timberlake sang and danced their way through the cold open, highlighting some of the top catchphrases and skits from the show’s history.

In a number complete with top hats and canes, the duo rapped, tapped and clapped their way through a list that hit favorite quotes, skits and impersonations including “Jane, you ignorant slut,” Bill Hader’s Stefon, Schweddy Balls, The Ambiguously Gay Duo, The Californians and many more.

Rachael Dratch and Molly Shannon dropped in as well.

Steve Martin, given the task of delivering the show’s monologue, compared the special to a high school reunion for a school “that is almost all white.” He added that the show would not only entertain, but pay tribute to “SNL” members who are no longer with us, including John Belushi, Gilda Radner and Jon Lovitz, who was surprised by his own death from his place in the show’s audience. Watch the opening monologue below:

From George Carlin to Sarah Silverman “it’s really comedians who have dominated” the “SNL” stage, Martin said, only to be interrupted by “America’s Tom Hanks,” clarifying that actors “bring to the show a legitimacy and a nuance” that comedians “can’t pull off.”

Alec Baldwin joined the two on the stage curious as to why he wasn’t given the job of delivering the monologue when he holds the hosting record.

“What about hosts who aren’t men over 80?” asked Melissa McCarthy.

“What about hosts who used to be in the cast?” interrupted Chris Rock.

Peyton Manning, Miley Cyrus and Billy Crystal popped in with their own questions, only to be cut off by Paul McCartney and Paul Simon asking “what about singers named ‘Paul’?”  The two crooners entertained with a quick duet of “I’ve Just Seen A Face,” before Martin introduced the show.