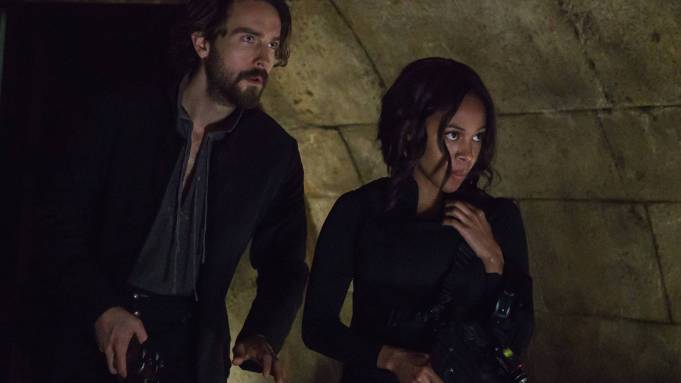 Spoiler warning: Do not read on unless you’ve seen the Nov. 19 midseason finale of “Sleepy Hollow.”

Fox’s “Sleepy Hollow” just delivered a shocking blow to the characters and the fans, as Nicole Beharie’s Abbie Mills sacrificed herself to save her sister Jenny (Lyndie Greenwood) and fellow Witness Ichabod Crane (Tom Mison). With one of the Witnesses seemingly dead, and Pandora (Shannyn Sossamon) and her lover The Hidden One (Peter Mensah) still on the loose, things look bleak for the good guys leading into the back half of the season.

Variety spoke to “Sleepy Hollow” showrunner Clifton Campbell on what went into Abbie’s decision, and how her sacrifice will affect the show moving forward.

Why did you feel like this was the right time for such a big move?

We felt really good about the relationship that Abbie and Jenny have this season. There’s an awful lot of angst from the first two seasons that they’ve grappled with… This season has been a lot about the support that they have for each other, and starting to live with it as fans and an audience. It’s one thing to see them acting better, but you put enough energy into that relationship and start to see them support each other in a very specific way, and it has more resonance. It just felt right this season, that we could put Abbie’s decision to utterly and completely support her sister, come what may, to the test. And that’s what led us to this sacrifice, and it isn’t just a sacrifice that she makes for Jenny, it’s really for Team Witness, which was really important for us.

Death is rarely permanent in “Sleepy Hollow,” so should fans be looking at Abbie’s return as a question of when and how, not if?

I don’t want to tell the audience how they should be looking at it. [Laughs.] I think, like all of us, they should enjoy the episode for what it’s worth and embrace the sacrifice that Abbie Mills makes, not only for her sister but for Crane and this world that they’re inhabiting, and just be utterly and completely surprised at how everybody reacts to this gigantic sacrifice that she makes.

How will Jenny deal with the knowledge that Abbie sacrificed herself to keep her safe? That’s a heavy burden to bear.

She would have dealt with it poorly in the way only Jenny can if she didn’t have a moderating influence in Joe and what they’ve just started to find in each other towards the end of the first half of the season. It’s an utterly and completely shocking sacrifice that she sees her sister make, it’s confounding emotionally, it’s devastating personally, and but for the fact that she has someone this season who’s there and can support her, she could’ve very easily gone off the deep end. Joe has been a remarkably successful character to pull into the series, and that relationship is so natural. We knew in the writers’ room what we had with those two and we leaned in because we felt it super early on. It isn’t just two really good-looking people that you enjoy seeing together, it’s profound in its shading; they just feel so good together and it really helps her in the back half with this devastating loss.

What lengths will Jenny go to in order to come to terms with this, or perhaps to try and bring Abbie back?

That’s her natural instinct and her comfort zone: action. Without having somebody in her life, she might make more risky decisions. In a very unique set of circumstances, the drastic thing Jenny Mills does is something unexpectedly emotional… It’ll play into this season’s intention to have Papa Mills show up and what that might mean to complete the story for these guys.

What else can you preview about Papa Mills’ introduction and his relationship with his daughters?

We’ve cast James McDaniel who’s a phenomenal actor, and James and I have had great conversations about this character. There are a lot of blanks that that character can fill in for anybody who’s a fan of this show, anybody who’s a fan of the Mills family story. All of their angst and the loss and sacrifice that they’ve been living with since day one is going back to their mother, so he can provide a lot of emotional context to the audience which we find very satisfying, and he’s really the perfect guy to play this.

Ichabod has already lost his wife, his son and his way of life — how will he cope with losing Abbie?

His devastation really shows in the last 30 seconds of tonight’s episode … for somebody who’s so emotionally well-kept and so completely clear-eyed, the final moments that Tom gives are really brilliant and emotionally wrought with layers and layers that we will see at play and lean into heavily when we come back. This loss is not like any of the other losses in his life – Katrina, his son, any of the loss of his family will pale in comparison to the devastation, and therefore the recklessness, that we see Crane come back with. It reframes him in a very unique and interesting way.

Aside from the emotional fallout, what other repercussions will we see from the midseason finale?

Pandora are the Hidden One are not sitting around whining about their loss. This plays very well into their overall agenda, and it’s something they immediately intend to capitalize on, but the sacrifice that Abbie makes obviously throws their plan a little bit asunder, and there’s gigantic fallout from that on the Pandora/Hidden One side. But the thing about Pandora and the Hidden One is that they have a very similar relationship to Abbie and Crane, a love of the ages – when they look at each other, you can see how deeply they care… They have very interesting relationship boxes that they check that are very similar to ours, and that sacrifice that Abbie makes to save the people that she loves the most, ironically throws the Hidden One and Pandora into a very interesting place.

How would you describe the back half of the season in terms of tone or energy, following this twist?

When we first start, it’s very driven. When you’re left with a hole this size, people want to fill it in as much as they can, not only in terms of story and character development – we do that rather quickly – the audience can also look forward to the [architecture] of a world Pandora and the Hidden One once had and once ruled over. And their plan to move forward with that and continue their reign of terror and their campaign to restore the world in their image is going to reframe all of our characters in a really fascinating way. I’m absolutely thrilled by the way this season is coming together in the back half. You’ve got an iconic character like Pandora and Pandora’s Box and all we think about when we think about that, and mix that up with a marriage that is 4000 years old and restoring before our very eyes… fans are really gonna love seeing how their origin, and how the origin of the Witnesses and the roles all four of them have been playing throughout the years are really going to come into shape. What I’m most excited about is seeing how the Witnesses are redefined in the back half and what that means for our characters.

What did you think of the “Sleepy Hollow” midseason finale? Weigh in below.