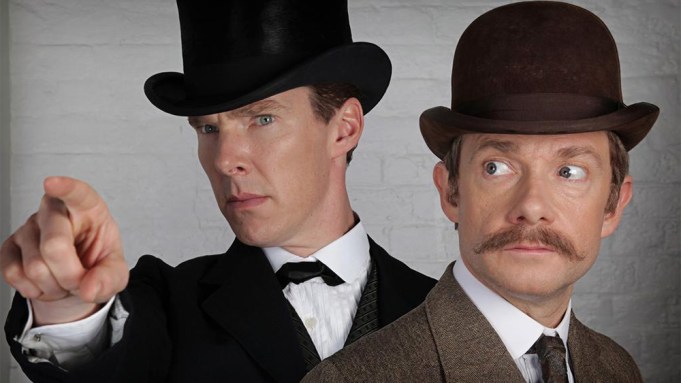 The “Sherlock” gang is heading to the Victorian era after three seasons spent dwelling in modern London.

In a clip of the special unveiled at Comic-Con in San Diego on Thursday, Benedict Cumberbatch and Martin Freeman can be seen in the attire that Sherlock and Dr. Watson have traditionally worn in other renderings of the stories by Arthur Conan Doyle. Unlike past versions, however, the clip addresses the gender politics of the era with a little help from landlady Mrs. Hudson.

Steven Moffat, the show’s creator, said this shift was intentional. “One of the problems with the original is the women don’t really speak very much,” Moffat told the crowd at Comic-Con. “Mrs. Hudson barely gets a line.”

Moffat also revealed that the Victorian special will bow in select theaters when it is released next year.

The creator admitted that he hasn’t begun writing season four of “Sherlock,” but assured attendees that he knows where it’s going and how it will “sucker-punch you into emotional devastation.”