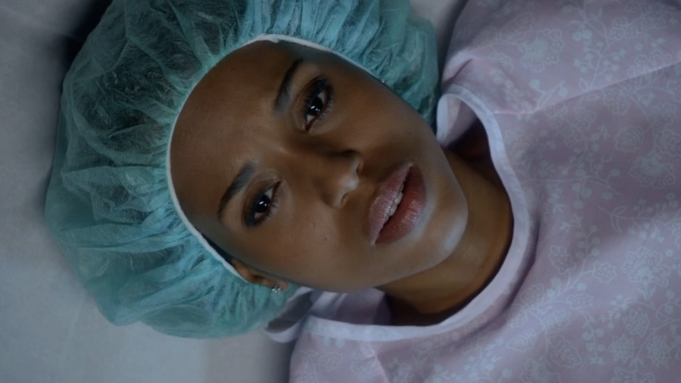 Shonda Rhimes has never shied away from tackling political storylines, and last night’s “Scandal” lived up to that standard.

The show featured plotlines that tackled the defunding of Planned Parenthood — a hot topic in the current presidential election — as well as abortion, with Olivia Pope (Kerry Washington) ending her surprise pregnancy. Frustrated by a bill that would have classified Planned Parenthood as “discretionary spending,” Republican Senator Mellie Grant (Bellamy Young) led a 16-hour filibuster on the Senate floor, reading off a laundry list of items that the bill would have kept intact.

“The ‘Scandal’ writers did their research,” Rhimes tweeted during the show. “Every budget item Mellie recites is actually real.”

The #ScandaI writers did their research– every budget item Mellie recites it actually REAL. #TGIT

After the episode aired, Planned Parenthood released a statement saying, “Tonight, the millions of people who tune into ‘Scandal’ every Thursday night learned that our rights to reproductive health care are under attack. Never one to shy away from critical issues, Shonda Rhimes used her platform to tell the world that if Planned Parenthood lost funding for contraception counseling, STI testing, cancer screenings, and safe, legal abortion — millions of people would suffer. And this episode wasn’t the first time one of Rhimes’ characters had an abortion, yet tonight we saw one of our favorite characters make the deeply personal decision that one in three women have made in their lifetime. We applaud Shonda Rhimes tonight — and every Thursday night – for proving that when women are telling our stories, the world will pause and watch. We just hope those in Congress — and throughout the nation — who are steadfast on rolling the clock back on reproductive health care access are taking note.”

The conservative group Media Research Center countered with a statement of their own: “Hollywood’s liberal values permeate movies and television. Last night’s episode of ABC’s ‘Scandal’ was pretty much an hour-long advertisement for Planned Parenthood. In the most disturbing scene, the main character has an abortion to ‘Silent Night’ (a hymn celebrating the birth of Jesus) playing in the background.” Rush Limbaugh weighed in, too, calling it “geniunely, literally sickening,”

Sources at ABC tell Variety they were prepared for the attention the show drew, posting a “viewer discretion” disclaimer before the episode. Advertisers were alerted as well, but none were surprised by the content or asked for their ads to be removed. The content rating remained the same as well, since it is already very high for the show.

“As always, there’s discussion: Are you going to alienate viewers?” says an ABC source. “It might be distasteful, but it isn’t so outrageous in the life of this character.” Adds another, “It was all sensitively done. These are incredibly flawed, complex characters. This is who these people are.”

“Scandal” fans — who are famously very vocal on social media — took to Twitter to debate the episode. Some reacted with surprise that Mellie, a conservative senator, would side with Planned Parenthood. (“If you watch the show, you know Shonda’s politics,” counters a show insider.) Others supported with the character, who’s been something of a basket case, for finally stepping up and doing something admirable. As for Olivia, her decision to get an abortion unilaterally, without consulting Fitz — her partner and the baby’s likely father — sparked much conversation, especially since that’s when fans first learned she was even pregnant.

Ilyse Hogue, president of NARAL Pro-Choice America, hailed the episode as groundbreaking. “I think what is so important of what ‘Scandal’ has done is two-fold: One is showing that there are ordinary women in every walk of life, like Kerry Washington’s character, who make decisions for very different reasons, and that they are just part of life,” Hogue told Variety. “And I think the second thing that is significant is about what ‘Scandal’ did was show how not scary an abortion procedure is.

“Like any groundbreaker, what Shonda Rhimes has done with this episode is make it OK for others to have these ordinary conversations in popular culture, and I think the impact of popular culture on public opinion and on taking what are thought of as ‘taboo’ issues and putting them front-and-center and giving permission to talk about them, that is a very significant impact and can’t be overstated.”

The first abortion to take place in primetime television came in November 1972, when a 47-year-old Maude Findlay on the CBS comedy “Maude” found herself unexpectedly pregnant and decided to have the procedure, which was allowed in New York at the time but came two months before the landmark U.S. Supreme Court ruling in Roe v. Wade. Later in 1973, Susan Lucci’s character of Erica Kane had television’s first legal abortion.

The networks generally shied away from the controversial subject in primetime for more than 15 years, before a flurry of programs targeting a young, female audience addressed the subject. These include the Canadian series “Degrassi High” in 1989, and the popular Fox drama “Beverly Hills, 90210” in 1994 (Andrea, played by Gabrielle Carteris).

Rick Kissell contributed to this report.