‘Saved By the Bell’ Cast Reunites on ‘Jimmy Fallon’ (VIDEO) 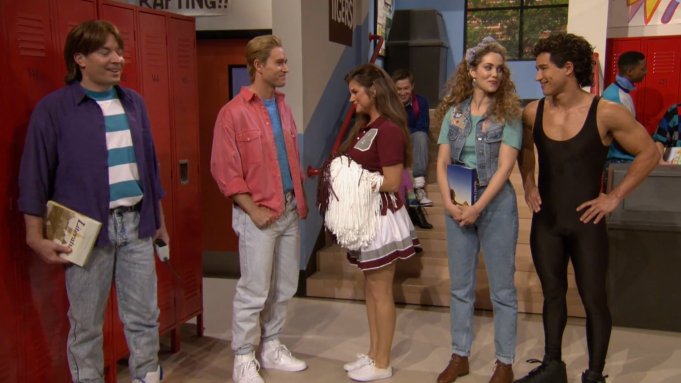 Jimmy Fallon has long-vowed to reunite the cast of “Saved by the Bell” and on Wednesday’s “Tonight Show” the NBC host finally delivered on his promise.

Fallon, playing a younger version of himself, enrolled at Bayside High School in the 8 minute sketch, as “Saved by the Bell” cast members joined him to re-enact memorable moments from the series, including Jesse’s “I’m so excited!” moment, Slater’s ballet moves and the Zack Attack anthem “Friends Forever.”

The cast even poked fun at their post-Bayside careers in Hollywood. When Fallon said he wanted to leave the school to join “SNL,” host a TV show and date Nicole Kidman someday, Zack Morris laughed.

“Jimmy going on a date with Nicole Kidman is like Jessie becoming a stripper,” he said.

Berkley, of course, starred in the 1995 film “Showgirls.”

Not all “Saved by the Bell” cast members made it to Wednesday’s reunion. Lisa Turtle (Lark Voorhies) and Screech (Dustin Diamond) were nowhere to be seen.

NBC’s “The Tonight Show with Jimmy Fallon” is filming this week in Los Angeles.