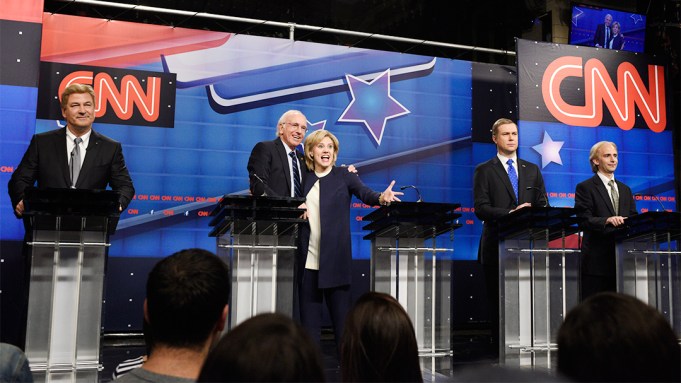 If satirizing the presidential race is supposed to be what makes “Saturday Night Live” stand out during an election year, the data tracking the show’s most popular sketches on YouTube doesn’t prove it.

Good, old fashioned celebrity-themed content still reigns supreme season to date on “SNL.”  A Nov. 22 sketch featuring a wacky family singing the ubiquitous Adele hit “Hello” was the top draw, with nearly 12.6 million views, according to ListenFirst Media, which monitored through Dec. 27 (excluding last season’s sketches from the first half of the year).

Only about 500,000 views behind “A Thanksgiving Miracle” is “Close Encounter,” which featured Ryan Gosling failing to keep a straight face in character as one of a trio disclosing a visit from aliens.

While politics cracks “SNL’s” top 10 at No. 3 with the first sketch in which Larry David unexpectedly played Democratic presidential candidate Bernie Sanders, it’s a distant third, clocking in at 8.2 million views. Four other political sketches fill out the top 10, including one featuring Donald Trump himself. The Republican presidential candidate may have correctly noted he’d be a huge TV ratings draw when he appeared on the show in November, but is apparently no match for Larry David online.

While half the top 10 is “SNL” political sketches, many more in that vein failed to compete with the likes of guest star Amy Schumer’s opening monologue and a spoof of “Star Wars” auditions, both of which also were big draws.

“SNL” typically generates big buzz during election years by not only lampooning the candidates making headlines, but attracting the candidates themselves. Hillary Clinton herself, for instance, made it into the top 10 with her October. 4 “SNL” appearance.

Interestingly, no sketches from the final episode of the year, in which Tina Fey and Amy Poehler revived their famous impressions of Sarah Palin and Clinton, respectively, made the Top 10.

While YouTube is likely the most popular place to watch “SNL” sketches online, it isn’t the only one, with NBC.com, Hulu and Yahoo Screen providing other sources to watch the NBC franchise.