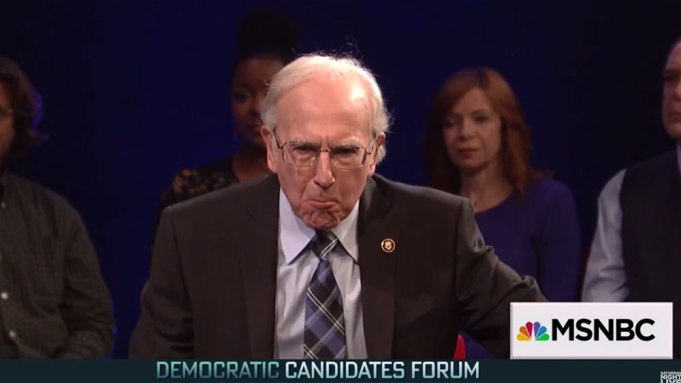 After dismissing Martin O’Malley (Taran Killam) quickly, Maddow moved on to Hillary Clinton (Kate McKinnon), congratulating her on her performance at the Benghazi hearings.

“Eleven hours baby,” said Clinton. “They couldn’t break me and they never will.”

Maddow put Clinton through her paces through some “MSNBC tough” questions about living in New York vs. returning to the South and being an introvert vs. an extrovert.

And then Larry David made his comeback as Bernie Sanders — to uproarious applause. “I didn’t need no fancy introduction,” he said. “I’m not Elvis Presley.”

On raising taxes: “We need to rebuild our nation’s infrastructure. It’s crumbling. That’s why I no longer drive on bridges or through tunnels. It’s too risky. Instead, I keep a kayak strapped to the top of my car.”

On campaign finance: “The other candidates, they’re taking millions of dollars from the Koch brothers and Exxon Mobil. But not me. I only accept coins. And not fancy coins. I only just want nickels and pennies, the coins of the middle class. So America, if you believe in Bernie, I need you to go home, open your vacuum, turn it upside down, and send me all the pennies that fall out of it. I’m Bernie Sanders, and I want your vacuum pennies.”