WATCH: Donald Trump Gets Upstaged By Larry David on ‘SNL’ 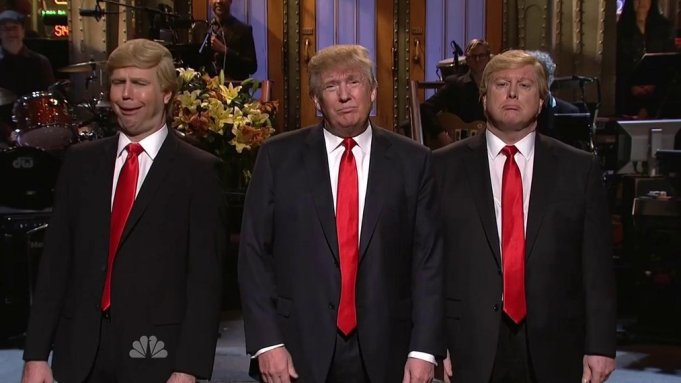 In the weeks leading up to his hosting gig on “Saturday Night Live,” Republican presidential candidate Donald Trump faced protestors — as well as threats of hecklers from the live studio audience.

Turns out someone did, but it was none other than “SNL” guest star Larry David.

Trump was flanked by his two doppelgangers, Taran Killam and Darrell Hammond, and was praising them: “They don’t have my talent, my money or especially my good looks, but you know what? They’re not bad, and we’re going to have a lot of fun tonight.”

Responded Trump: “As a businessman, I can fully respect that.”

And how’s this for a punchline: David will get the $5,000 reward. The group Deport Racism tweeted that joke or not, his “heckling” met their standards:

#LarryDavid wins the $5,000 "bounty" from https://t.co/PcIfWXCmnT for calling Trump a Racist on #SNL. Joke or not, it was true. Go Larry!