Continue to Variety SKIP AD
You will be redirected back to your article in seconds
Feb 15, 2015 8:30pm PT 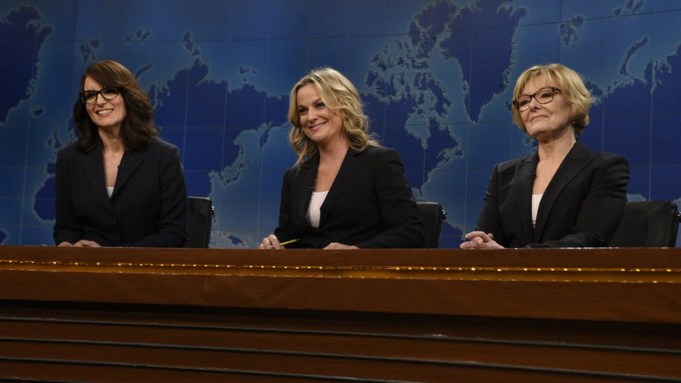 Tonight’s star-studded “Saturday Night Live” 40th anniversary special was filled with memorable montages from the show’s deep archives, but it also featured hilarious moments that are sure to become instant classics:

•“History of SNL Rap”: Jimmy Fallon and Justin Timberlake opened the show with a musical number celebrating famous catchphrases that hit all the right goofy notes.

• “Weekend Update”: It was the holy trinity of hosts when Tina Fey, Amy Poehler and Jane Curtin all took their place at the anchor desk.

• “The Californians”: Any complaints that the sketch ran too long were forgotten when it was capped off with a sure-to-be-GIFed kiss between Betty White and Bradley Cooper.

• “Nick the Lounge Singer”: Bill Murray returned to the “SNL” stage with an ever-so-soulful rendition of the theme song from “Jaws” — accompanied, of course, by Paul Shaffer at the keyboards.

• Martin Short & Maya Rudolph: The multi-hyphenates headlined a segment introducing “SNL’s” faux musical acts — including Opera Man and Garth & Kat — but all eyes and ears were on them.

• Chris Rock: The comedian gave a heartfelt tribute to Eddie Murphy — “He changed everything” — that upstaged Murphy himself.

• “Super Bass-O-Matic”: The only way to outdo the original fake commercial was to do it all over again, with Dan Aykroyd and Laraine Newman.

• Auditions: There’s nothing more heartwarming — and heartbreaking — than seeing young comedians pouring their hearts and souls out in a bid to impress Lorne Michaels.

• “Wayne’s World”: Mike Myers and Dana Carvey revisited Wayne & Garth in imitable style, with an “SNL” top ten list that made sure to put Kanye West back in his place/seat. (And those Lorne Michaels impressions!)

• “Celebrity Jeopardy”: There were so many spot-on impersonations in this sketch, but Jim Carrey’s take on Matthew McConaughey — voice-over included — was perfection.

• “And That’s When You Break”: Andy Samberg and Adam Sandler teamed up for a new digital short, celebrating all the times cast members have cracked up during the show. Sample lyric: “Little known fact: Lorne loves it when you break.”