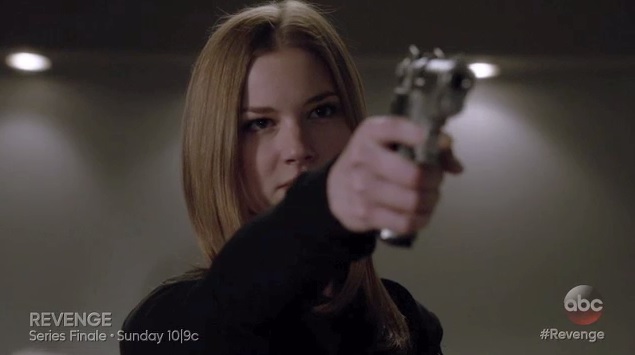 “Revenge” wraps its four season-run this Sunday, but before Victoria Grayson (Madeleine Stowe) and Emily Thorne/Amanda Clarke (Emily VanCamp) come face-to-face for good, Variety has a first look at their final showdown.

In the sneak peek (watch above), Emily/Amanda has escaped jail to find Victoria, and pulls a gun on her, upon confrontation.

“I believe that the people who hurt my family deserve to live in agony, not pay with their lives,” Emily/Amanda says. “But you — you are the one exception. For you, death is my only true revenge.”

Before the clip cuts, a gunshot is fired, as she says, “Goodbye, Victoria.”

After the penultimate episode, in which Victoria’s death was revealed to be a fake-out, exec producer Sunil Nayar told Variety that Emily will learn one last detail from the night her enemy lit Grayson Manor on fire, which will bring everything full circle.

“There’s one more final, huge, wonderful detail that we’ll reveal in the series finale that Emily couldn’t have known that she will also come to learn in the next episode,” Nayar said, adding that it will “completely reveal what Victoria’s whole plan was, ultimately.”

Another clue will come from Victoria’s long-lost daughter Charlotte (Christa B. Allen), which will likely make sense of return for the final episode. “She’s the holder of a giant piece of information,” the showrunner said. “I’m excited to see how people react to that.”

Nayar also revealed two major deaths will occur by episode’s end Sunday night, teasing, “There will be two people in graves by the end of the episode.”