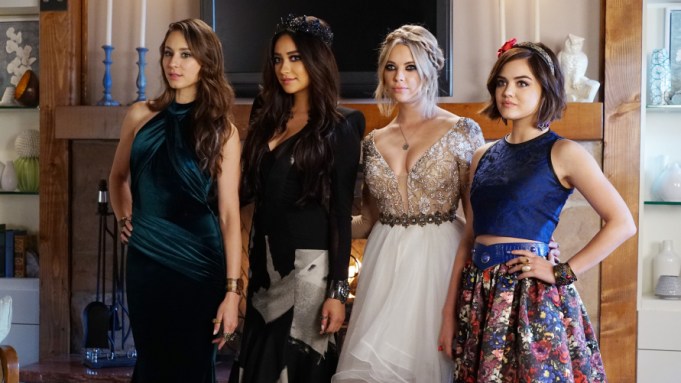 “Pretty Little Liars” wrapped up its sixth mid-season finale Tuesday night, and has already been picked up for season 7, landing a two-season renewal last year.

Despite rumors that the seventh season would be the last, showrunner Marlene King tells Variety that she’s open to an eighth season — and a movie.

“I think we’ll let the fans tell us what they want. We’re open to that,” King responded when asked about another season and film at the Television Critics’ Association press tour in Beverly Hills, Calif., saying both are “very possible.”

Previously giving “Liars” fans reason to believe season 7 would be the end, star Lucy Hale told E! News, “Yeah, there’s like rumors of maybe a movie — there might be a movie, but seven seasons will definitely end the show.”

During the same Variety interview with King (watch above), actress Shay Mitchell joked that she’d like “PLL” to go into the “Golden Girls” era. On the prospect of a movie, Mitchell quipped of a vacation setting: “I keep pushing them. We all do. We’re like, ‘Can we do it in Europe? Or, like, Tahiti?'”

Regardless of an eighth season — on which ABC Family declined to comment — the show, which ranks as the summer’s top-tweeted series, is freshening up with a five-year time jump when the second half of season 6 premieres, giving the storyline room to expand into more episodes.

“We just try to keep the train moving as fast as possible on the tracks,” King explains. “We haven’t slowed down, and we started in the beginning telling the story at a super fast speed and we try to keep up that speed, keep the twists and turns and the ‘OMG’ moments coming.”

Mitchell — who told Variety she’s excited for the changes coming to the “fresh, new show,” including playing a character closer to her age, now that the liars will be five years past high school when season 6 returns — attributes the long-running success to the writing.