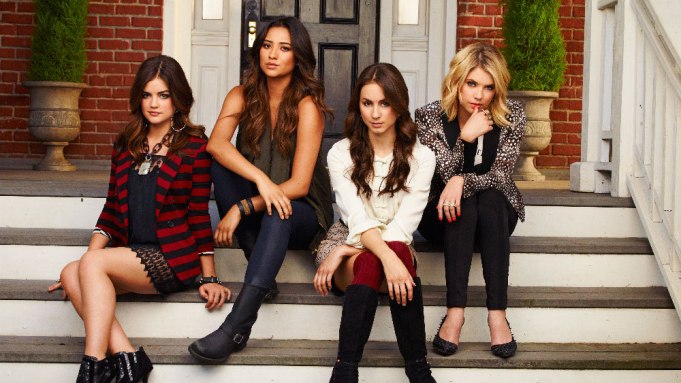 The cast and creator of ABC Family’s “Pretty Little Liars” appeared at New York Comic-Con on Friday to preview the first four minutes of the winter premiere, share a few details about the five-year time jump and reveal the return date for Season 6B, which will premiere at 8 p.m. on Tuesday, January 12.

The show will also air a special flash-forward episode that promises to show fans what happened off-screen during those five years at 8 p.m. on Tuesday, November 24.

According to creator I. Marlene King, the time jump was “a group consensus,” particularly because the cast members were “ready to play close to their own ages … it was time to age up the show, make it a little edgier and more mature.”

When the show returns, all the girls have left Rosewood and come back “at another critical point in their lives,” per exec producer Oliver Goldstick.

Alison (Sasha Pieterse) has become a teacher in Rosewood in the intervening years, and King admits, “She’s such an inspiring teacher.” She is responsible for bringing the girls back together, according to Pieterse: “I think she loves these girls and they’e such a big part of her life — it’s surreal that they’re not there … It’s really fun to reinvent our characters. You’re gonna be able to watch this and it’s a totally different show in the best way — we’re telling a new story.”

Lucy Hale declined to confirm the status of her character, Aria’s relationship with on-again/off-again beau Ezra (Ian Harding), only revealing, “there are a few twists in her personal life.” Although she suspected Aria might go into photography, Hale teased, “She takes a left turn and falls in love with writing and becomes a publisher. You’ll find out later why she was looking at Ezra on the back of a book … I think they’ll always be in each other’s lives, but it’s complicated.”

We’ll find Spencer (Troian Bellisario) in the political world in Washington, D.C., while Hanna will be involved in New York fashion, “like ‘Devil Wears Prada,'” according to actress Ashley Benson. Emily will have had a harder life than the other girls over the past five years, actress Shay Mitchell teased ominously, but we find her as a bartender in a tropical locale.

Here’s how ABC Family describes Season 6b: Picking up five years after we last saw the Liars, the girls are not the same people they were when they left Rosewood. Having pursued their own paths and adjusting to a life without “A,” how will they be able to cope when something happens in Rosewood that forces them to go back to where it all started? Torn between their old habits and their new lives, the Liars must stick around, and together, as relationships are once again put to the test and new secrets are revealed.

To give viewers a taste of what’s in store, the one-hour behind-the-scenes special, “Pretty Little Liars: 5 Years Forward,” will offer fans a glimpse at what everyone’s favorite characters have been up to inside and outside of Rosewood over the past five years. The episode will feature never-before-seen scenes, backstage tours of brand new ‘PLL’ sets, interviews with the cast and crew surrounding the highly anticipated time jump, including the style evolution of the Liars, and more.