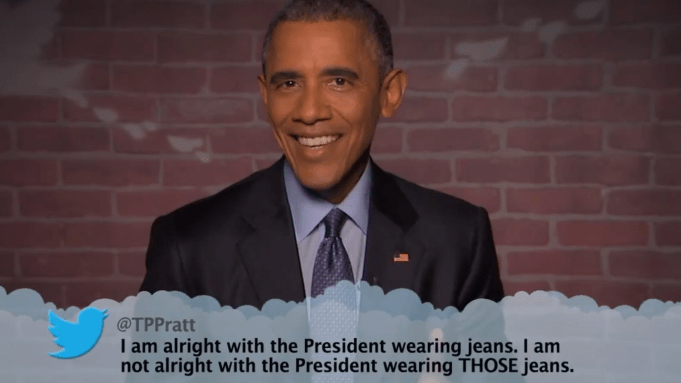 President Obama, appearing on ABC’s “Jimmy Kimmel Live” on Thursday, played along with the host in riffs on birthers, mean Tweets and Hillary Clinton’s email address.

Making his first appearance on the show since he became president, Obama did a version of Kimmel’s segment where guests read mean Tweets about themselves (video below). According to a pool report, Obama said that the Tweets were not as mean as “what the Senate says about me.”

In joke about Hillary Clinton’s use of a private email account, Obama refused to give Kimmel her email address.

As he has done before, Obama joked about birthers, or the belief that he was born in Kenya even though the White House long ago produced a birth certificate to refute it.

When Kimmel asked Obama if he could drive, Obama responded, “I can’t drive. I mean I can, but…”

“Is that because you don’t have a birth certificate?” Kimmel asked.

“In Kenya we drive on the other side of the street,” Obama quipped back.

Obama did comment about the shooting of police officers in Ferguson, Mo., telling Kimmel, “There’s no excuse for criminal acts. Whoever fired those shots shouldn’t detract from the issue. They need to be arrested. And then what we need to do is make sure like-minded, good-spirited people on both sides, law enforcement who have a terrifically tough job and people who understand they don’t want to be stopped and harassed because of their race, that we’re able to work together to try and come up with some good answers.”

Obama’s visit to Los Angeles did force authorities to close streets throughout Los Angeles, including those around Kimmel’s studio on Hollywood Boulevard.

Obama is the first sitting president to make an in-studio guest appearance on a late-night talk show, starting with a visit to “The Tonight Show With Jay Leno” in March 2009. Since then, he has appeared on “Late Show With David Letterman,” “Late Night With Jimmy Fallon,” “The Daily Show with Jon Stewart” and “The Colbert Report.”

Obama was to appear on Kimmel in July, but that visit was canceled after the White House determined that it would be inappropriate to do a comedy show with several international crises unfolding. In an interview this week with the Daily Beast, Kimmel called Obama “the most intentionally funny president of my lifetime.”

This is Obama’s 21st trip to the region since taking office, and according to CBSLA.com, he will be headlining his 32nd fundraiser in Los Angeles County since entering the White House.

The event at the Santa Monica home of ICM Partners’ Chris Silbermann and his wife, Julia Franz, was described as a roundtable discussion, with only two dozen donors paying $33,400 per couple. The money raised will go to the Democratic National Committee.