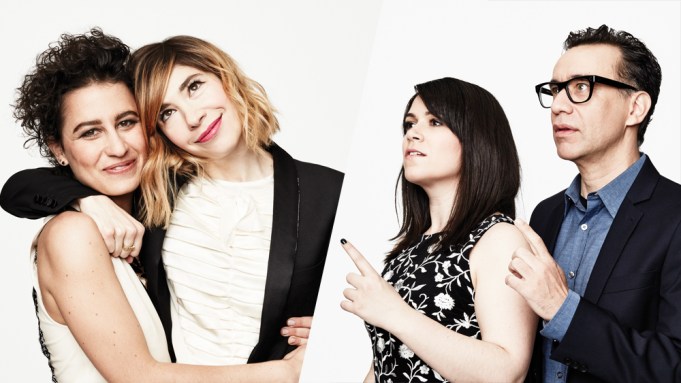 Improv, anyone? Abbi Jacobson and Ilana Glazer (“Broad City”) sat down with Fred Armisen and Carrie Brownstein (“Portlandia”) at Variety’s Actors on Actors to discuss filming in New York City and Portland, how they got started in comedy, and their influences.

Jacobson: I think sometimes the most difficult thing sometimes now for us is shooting in certain outdoor areas in New York. Just, logistically difficult. Do you guys have that in…

Jacobson: I’m sure everyone knows exactly what you are doing now.

Brownstein: There’s definitely certain streets in Portland where it feels like you’re making a collective film with the entire city, which can sometimes kind of take you out of the moment in terms of performance. It can also add to it and make it really exciting and lively. I find there are stunts that kind of put me in peril sometimes. Whether it’s driving a car into garbage cans, or standing on the side of the highway. Jumping, falling off couches. And I do get scared of those moments because I have legitimately hurt myself a couple of times.

Jacobson (to Glazer): You hurt your ankle with the cab… when we like rolled over a cab, right?

Glazer: Yeah, that was bad.

Jacobson: You smacked your leg.

Glazer: I felt like in “A League of Their Own” when she has that crazy bruise on her leg. You know, actually [shooting on the] subway was pretty disgusting. Pretty appropriately gross.

Armisen: How did you shoot in the subway?

Glazer: We just shoot in the shuttle at Times Square, so it goes back and forth.

Armisen: So you have to rent it out?

Glazer: Yeah, and people are just like (exhales), “Is the train not functioning?” And they’re like waiting for it..and I feel bad.

Armisen (laughing): Was that your impression of someone coming up to you while filming?

Glazer: Yes! That was my impression.