‘Once Upon a Time’: Colin O’Donoghue Talks Hook Giving ‘Complete Control’ to the Darkness 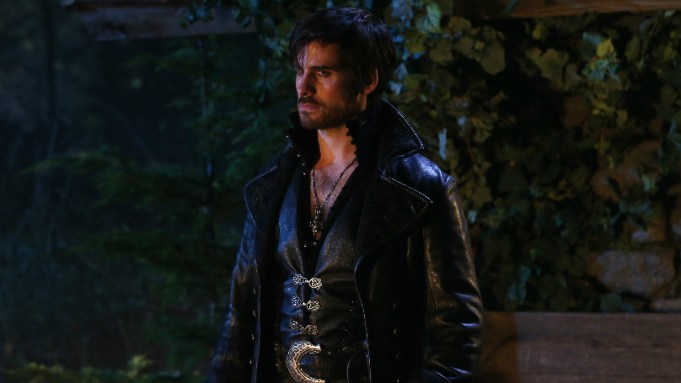 “Once Upon a Time” has set the stage for a deadly battle between good and evil in its winter finale, as Colin O’Donoghue’s Captain Hook faces off against Jennifer Morrison’s Emma with the fate of Storybrooke hanging in the balance.

Variety spoke to O’Donoghue ahead of episode 511, titled “Swan Song,” to find out whether there’s hope for Hook and Emma’s relationship, his character’s similarities to Rumplestiltskin (Robert Carlyle), and what we can expect from his team-up with Regina (Lana Parrilla) this week.

How has playing Hook as the Dark One affected your approach to him as a character?

He’s kind of similar to the Hook I played in season two and part of season three. He has a little bit more of a swagger … essentially he’s the same character, only much darker, so he has little or no empathy. He’s got no inhibitions with anything, and it’s kind of fun to be able to do that, where he gives complete control over to the darkness. It’s a different approach in the sense of, basically you can do whatever you want with something like that, because if somebody doesn’t have empathy, I’m sure that they can just enjoy seeing misery anywhere around them.

Did showrunners Adam Horowitz and Eddy Kitsis give you any hints about the Dark One mythology or tips on what his motivations were before you got to tackle this version of him?

Kind of. I’ve been on the show for a while so I understand the concept of the darkness that they’ve created in the show. They said basically he’s like the original Captain Hook, only amplified by a hundred, you know what I mean, or a thousand. He’s just somebody who just wants to see carnage and wreak havoc in as much as he can do.

In the last episode, Hook said some very cruel things to Emma that were obviously based on a lot of her existing insecurities. What kind of repercussions will those words have for them moving forward?

It’s complicated, because I think deep down, in much the same way that Rumple loved Belle [Emilie de Ravin], and even now Emma as the Dark One still loves Hook, Hook still has the ability to love Emma. At the minute, he’s only just realized that she completely betrayed him, because he genuinely would have preferred to die than to become a Dark One, and at this stage now, as the Dark One, he’s just incredibly pissed off with her. [Laughs.] Basically he’s acting like a really pissed off boyfriend, and when people get into stupid arguments in their day-to-day lives, they say hurtful things that sometimes they don’t mean. But when you are essentially the most evil person in the world … you really go for the jugular, and the problem is that you could possibly follow through on what you say. But I think that, deep down, there’s still a part of him that loves her. It’s the same with Rumple. It’s taken him hundreds of years to stop his heart from going fully dark and fully black, which is what we explored this season. So there is still a part of him that can care for her.

In the flashbacks, we saw that Emma was capable of using their love to help Hook shut out the Darkness early on. So is there a part of him that can still be reached that way, or is he so angry with her at the moment that he’s just full steam ahead on his mission for revenge?

You’ll have to wait to see that until Sunday. That question will be answered on Sunday, but I’m not going to tell you how. But the plan as is, it follows through. You saw in the teaser for this Sunday’s episode where the Dark Ones return and Hook essentially is willing to be a pawn to the Darkness to get his revenge on Rumplestiltskin, which is all he cares about, because that’s the thing that turned him dark in the first place. So all that gets answered on Sunday.

Hook is a character who has always struggled with letting go of the past and his own dark impulses. So hypothetically, even if he does manage to escape being the Dark One at some point, how do you think this brush with darkness with affect him, moving forward?

I’m not sure I know the answer to that — I can only go on what we see with Rumplestiltskin as the previous Dark One, who’s lost his power now, but there is still that creeping want, once you’ve tasted it. I think it’s a difficult thing to let go of. And with Hook, the things that he’s done in his past up until he became the Dark One really haunted him and colored who he was and colored both his darkness and also his redemption, because he had to try and let go of some of those things to allow himself to love again. I think with this, essentially it wasn’t his decision to become the Dark One, so that’s maybe something that might be a redeeming factor. But I think the hurtful things that he’s done or is about to do, if he ever wasn’t dark, it might still stick with him.

We’re also going to be meeting Hook’s father (Adam Croasdell) and taking a look back into his childhood — anything you can preview about their relationship?

I can’t say too much about it because … it’s such an important relationship to Hook, and I’d rather people watch and formulate their own opinions as to what that was about. For me, it was an interesting thing and I was delighted that we got to see part of Hook’s relationship with his father, because we knew from before that that’s such an important part of forming who he was or who he was to become.

Adam and Eddy have also teased a Hook and Regina team-up in this week’s episode — what can fans expect from that?