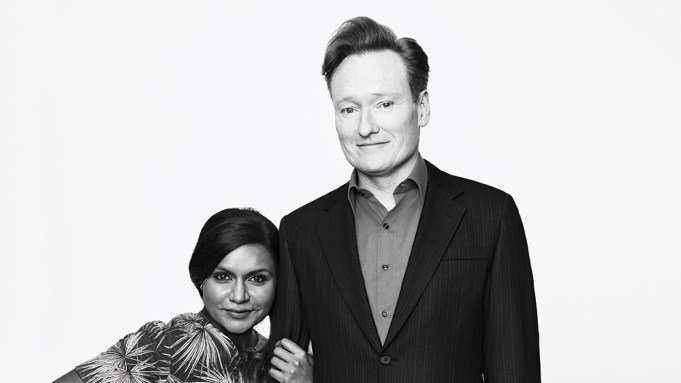 Mindy Kaling (star and executive producer of “The Mindy Project”) began her writing career as an intern on Conan O’Brien’s talkshow. When they reunited in Variety’s Actors on Actors studio, they quickly segued into a revealing conversation about pleasing their parents. Or not.

Conan O’Brien: When did you decide this was something you wanted to get involved in? As opposed to being a neuroscientist.

Mindy Kaling: I think I absorbed a lot of television as a child because my parents immigrated to this country and were very suspicious about letting me go out and do a lot of activities so I stayed in and watched a lot of TV. And for some reason, watching “Fawlty Towers” and knowing what a sitcom was about seemed like such a fun thing to do. So I think, starting at like 6 or 7.

O’Brien: Wow, that’s early. And “Fawlty Towers,” that’s a perfect sitcom. So at least you’re studying the good stuff. I think that’s another thing when you’re watching TV as a kid, you start to weed out what’s the good stuff, what’s the bad stuff. And then you start to be drawn toward what you want to do.

Kaling: That was on PBS, so it sort of snuck around my parents that there were these comedy shows. But for you, Conan, I remember when I saw you take over “Late Night,” I thought you were so funny. You represent to writers who want to be performers, you’re proof of their potential.

O’Brien: It’s funny that you say that because I always felt like a fraud. When I was starting out I just felt like, who am I kidding? I can’t pull this off, but then I would rely on other people who I knew had started out as writers and then had gone onto great things. I would learn later on that Steve Martin, Woody Allen started out as writers. And so I would always cling to that like, it can be done. Now you have to realize the impact you’re having. People watch you doing your show and you’re not afraid to have your own take on a television comedy, and to do it your way.

Kaling: It is very nice because, I think, that there’s performers that you admire, and then there are people that you both admire and they inspire you. For me it can be a little difficult because the people who are inspired by me are usually young girls, often young women of color, and I don’t want to let them down.

O’Brien: That’s great that you have that feeling. I think there are people who don’t care. There are people who make it and they have young people come up to them and they really do have an attitude of, “I made it, I’m in the lifeboat,” and they’re hitting other people with the oar who are in the water. I have the same feeling when young people come up to me and they say, “I like what you do;” you do feel, “OK, this is the moment that they’re getting an actual interaction with me, and I have to make it good. I want it to live up to what they might want it to be.” My wife accuses me of going too far. I’m like, “What’s your name, it’s nice to see you. Are you hungry? Would you like a steak? Would you like to sit at our table?” And so that can bleed over, for me, into a neediness.

Kaling: I love coming on your show. I want to know what your favorite moment was this past season.

O’Brien: The past season, definitely going to Cuba. That was one of the highlights of my career. We went in under the radar. we had our camera crew fly in from Canada. We came in and said we were tourists. And we started shooting guerrilla-style out on the streets. The people were amazing and the improv is natural. People aren’t overly camera-savvy there the way they can be in this country where everyone has their own reality show. And so it was sweet and it was nice and really funny. The whole thing just kind of came together and gelled. How about you? Was there a moment this year when you felt like, OK, this is special?

Kaling: Even though it’s a comedy show, I do get to do a lot of serious stuff, and the character’s going through a lot of things. Before my mom passed away, she used to say that, “When you make a show, just remember that for most people life is really hard.” That’s the only advice she gave me. So I was like, “OK, well then how can I present that in the show?” My mom went through a lot, like she got pregnant accidentally, and these are things that really resonate for people my age.

O’Brien: I had a question for you because you allude to your parents and your upbringing. Do you feel any tension sometimes between wanting to please your parents and be a good person? You have scenes sometimes where you’re in bed, it’s romantic. Do you know what I mean? Because I know we probably have that in common. I’m very Catholic, that’s how I was raised, and I come from very good Catholics, and I’m constantly doing things on my show that are completely outrageous — like going to a spa naked with Steven Yeun from “The Walking Dead.” When I’m doing comedy, I forget how repressed I am. But then it returns to me the minute I’m done doing it and I’m horrified. What’s your experience with that?

Kaling: I think that, and I’ll bet this is true of you just knowing a little bit, which is that because I have a very A-student personality, and I love my parents and was very in awe of them, so I wanted to impress them and for them to be proud all the time. So for me, I underestimated what they were able to handle. For me it was a maturing and thinking, well they’re actually people outside of just being my mom and dad. And they see other things that are a little bit sophisticated. For a while I used to be very scared because our show is just incredibly sexy and sexual because as a late bloomer, I’m someone who’s very titillated and interested by that stuff.

O’Brien: This is a therapy session. My parents were extremely hard-working, I was hard-working, I was a great student, and then I got into comedy and I work really hard on my comedy, but then it takes me to strange places — places where I’m involved in things that are completely perverse and perverted and foul.

Kaling: And you don’t want to be considered a son in that instance.

O’Brien: Exactly, but it’s funny that I had that same realization, which is my father won’t allude to the specific thing, but he’ll say well that thing you did was really funny. And I’ll think about it and I’ll go, “Oh my god that was this thing where I’m naked and a topless woman tackles me.” Understanding that my father can handle it, because he’s been out in the world. We turn our parents into these cardboard cutouts who cannot handle the fact that you might be in a scene where you have to kiss someone that you’re not properly introduced to.

Kaling: I’ve kissed and had to take showers with like 48 men on my show. I actually have a good trick with my dad, which is if we’re watching an episode together and I know something’s going to happen, I’ll just start talking to him about the Red Sox. He’s not always crazy about everything, I can tell. But he just doesn’t talk about it. That’s a sign of a good parent, I think.