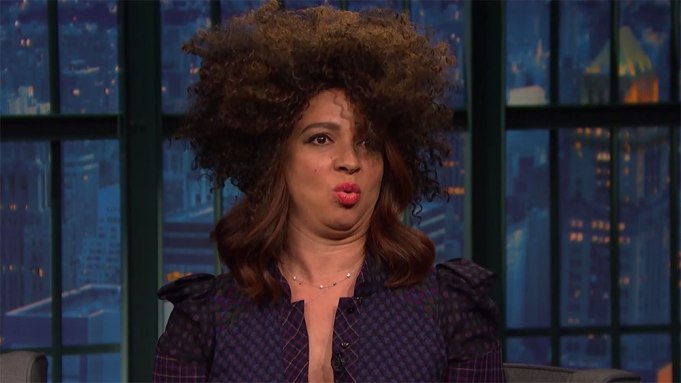 For everyone lamenting the fact that “Saturday Night Live” is on hiatus while the Rachel Dolezal controversy rages on, Maya Rudolph has answered your wishes.

While visiting “Late Night With Seth Meyers,” Rudolph told her fellow “SNL” alum Meyers that she has, unsurprisingly, been approached for a Dolezal impression with the former NAACP leader in the spotlight — despite the fact that Rudolph left “SNL” as a cast member in 2007.

“When you leave ‘SNL,’ sometimes things will happen in the news and people will say, ‘Oh my God, it’s such a shame that you’re not there,’” Meyers said. “You have to have been getting this a lot lately.”

Don’t worry, though: Meyers provided Rudolph with a stage to do what she does best.

They watched Dolezal’s extremely awkward interview in which a reporter asked her whether or not she was black, with Dolezal unable to answer. With that inspiration, Rudolph donned a large wig and went full Dolezal — wide-eyed and unable to answer simple questions.