Maggie Gyllenhaal and Liev Schreiber on Their Toughest Scenes (VIDEO) 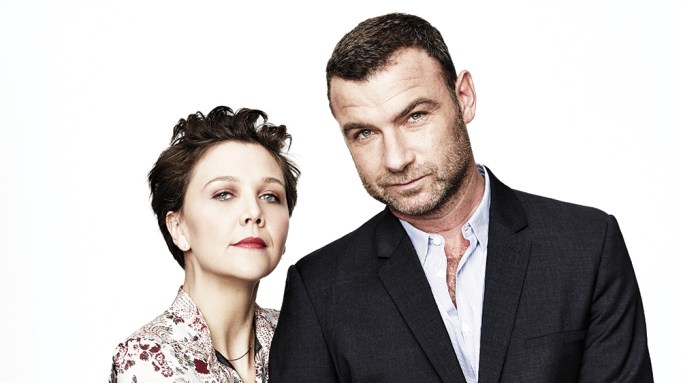 Maggie Gyllenhaal (“The Honorable Woman”) and Liev Schreiber (“Ray Donovan”) teamed up in Variety‘s Actors on Actors studio. The two talented thespians — who have also worked on film and the stage — talked about the unique challenges of working in television.

Maggie Gyllenhaal: What was the most difficult scene you had to film?

Liev Schreiber: The ones that people typically think are challenging are the ones that are very dramatic have some emotional pull. But those are the ones that I generally find the easiest because there’s something to do and you know what you’re doing. I think that the scenes that are more difficult (for me) are the scenes that you’re not sure, or maybe the writers aren’t sure, what they want the scene to be about. And you’re sort of rifling around in the scene with different attitudes and approaches in the hopes of finding something that has some narrative continuity to it.

Gyllenhaal: OK, so if you’re in that situation — usually in a movie, there’s somebody that you can trust. Either it’s someone you’re acting with or it’s the director. But when you’re on a television show, it isn’t always the same director, and the writers haven’t totally figured something out, what do you do?

Schreiber: That’s what’s fun about doing television. That’s sort of the high-wire act of it – you’re out there without a net and you rely on the people that you’re working with, you rely on the team of writers, the director, and even the crew. And you talk about it. Unfortunately, as you know, it’s so fast that you don’t have a tremendous amount of time to have an open debate, but that’s the way we like to work. We’ll read the scene first, talk about it, and then try it. Put it up on its feet. It’s certainly nothing like theater, where you have five or six weeks as a company to try and figure out how you’re going to deliver that text. But I think that’s the luxury of having it written before you start.

Gyllenhaal: Yeah, because there’s something you can hold onto. I feel like I don’t ever know what the basic big themes are, what my character’s going to learn — I don’t know that before I start. But I don’t get involved in something unless I trust that there is some something I’m gonna try and figure out and work through that’s solid and can hold me. But I get scared sometimes thinking about doing more television and in the more classic form where it’s shifting and changing. What can I lean on? And is there somebody who has a real, wise, set sense of the world we’re dealing with, and the themes we’re dealing with that might be really unconscious and hard to put a finger on.

Schreiber: I try to remind myself to take risks. The difficult thing, particularly with a character like Ray, is that he doesn’t speak. He’s kind of a stoic.

Gyllenhaal: I do think of you as a verbal person, as a literary person, in terms of the work I’ve seen of yours on stage — not just an agility with words, but a real understanding and love for them. So I wonder how that feels.

Schreiber: I think that’s part of why I was drawn to Ray because I’ve always been a little curious about film acting and how you convey character because I don’t believe that it is entirely on language. And so here was a character who was completely stripped back of language and how to navigate not only that but also subjective perspective. What was it that drew you to Nessa (your character in Honorable Woman)?

Gyllenhaal: I felt when I read it like I’d never read anybody like this before. Maybe partially because it was eight hours of being with one woman, and I got to read all eight of them. So you got to see the ways in which she’s powerful and graceful and very intelligent, and unapologetic for all of those things — and then the ways in which she’s broken and like a tiny child and confused. I guess I was interested in how, and it’s pretty explicitly what happens to her on some level, she starts out trying to be this perfect thing, doing a performance of herself, which is really exquisite and excellent, her performance.

Gyllenhaal: Right. Hugo (the creator of “Honorable Woman”) and I have said before that Nessa’s kind of better than both of us. That speech is incredible.

Schreiber: You know there aren’t a ton of roles for women where they get to play powerful characters like that, and I think the way that you articulated her power and her grace, that was, for me, the skeleton of it . That she was always trying to make the right decision and that was very clear. And it was very feminine. And it was a way to speak to power that I thought was a very smart choice.

Gyllenhaal: Right. And then it becomes impossible for her to identify what the right decision is. It goes beyond that paradigm. That was the stuff I got really. I’d really like to get a TV show that shoots in New York, that would be awesome. I’ve got two kids, and they go to school in Brooklyn, and then I did one this that shot in London and Morocco and so we’re like in Morocco at the end, and we’ve all like lost ten pounds, and…

Gyllenhaal: And I feel like I never would have been able to shoot those scenes if we’d shot them in the beginning. I just wouldn’t have- I didn’t know what they meant when I read them in the script and I’m not even sure Hugo knew what they meant. You know, it’s kind of like totally giving up to something bigger than you.

Schreiber: It’s an organic process. I think that’s another interesting thing about doing television shows is that the process itself affects the performance and the content.