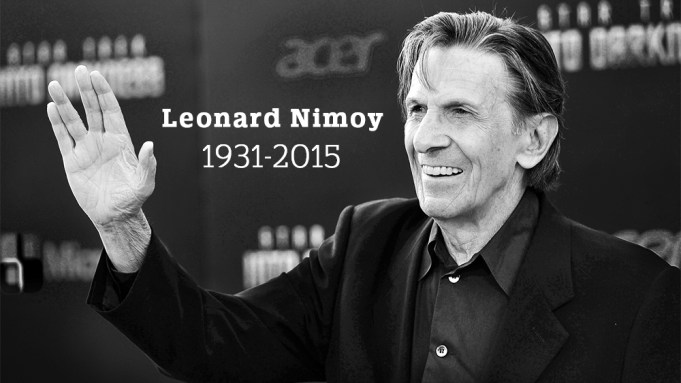 Leonard Nimoy lived up to his longtime catchphrase: Live long and prosper. Having achieved success in many arenas during his lifetime, the actor, director, writer and photographer died Friday in Los Angeles of end-stage chronic obstructive pulmonary disease. He was 83.

Most widely known for his performance as half-human, half-Vulcan science officer Spock on the classic sci-fi TV show “Star Trek” and its many subsequent film and videogame incarnations, Nimoy was also a successful director, helming “Star Trek” pics “The Search for Spock” and “The Voyage Home,” as well as non-“Star Trek” fare; an accomplished stage actor; a published writer and poet; and a noted photographer. He also dabbled in singing and songwriting.

But despite his varied talents, Nimoy will forever be linked with the logical Mr. Spock. Spotted by “Star Trek” creator Gene Roddenberry when he appeared on Roddenberry’s NBC Marine Corps. skein “The Lieutenant,” Nimoy was offered the role of Spock and co-starred in the 1965 “Star Trek” pilot “The Cage.” NBC execs liked the concept but thought the pilot too cerebral, so they ordered a second pilot of the Desilu production with some script and cast changes (only Nimoy made it through both pilots). The series finally bowed on NBC in the fall of 1966. After three seasons, it was canceled in 1969 but would go on to be a hit in syndication, spawning films and other TV iterations and gaining a huge following of fans known as Trekkers or Trekkies.

After the series wrapped, Nimoy joined the fourth season of spy series “Mission: Impossible” as master-of-disguise Paris, leaving after the fifth season. He went on to star in the 1971 Western “Catlow,” with Yul Brynner and Richard Crenna, and the 1978 remake of “Invasion of the Body Snatchers” with Donald Sutherland and Jeffrey Goldblum. The actor also made a series of TV films throughout the ’70s and received an Emmy nomination in 1982 for his role as Golda Meir’s husband in telepic “A Woman Called Golda.”

Also during the ’70s, Nimoy narrated the docuseries “In Search of …,” which investigated unexplained events, paranormal phenomena and urban legends long before these matters become the common fodder of pop culture.

Then the siren call of “Star Trek” beckoned again and Nimoy returned to the role of Mr. Spock for 1979’s “Star Trek: The Motion Picture.” The film opened well at the box office, and though not well reviewed, it did spawn enough interest for Paramount to greenlight sequels that would continue into the 1990s: “The Wrath of Khan” (1982), “The Search for Spock” (1984), “The Voyage Home” (1986), “The Final Frontier” (1989) and “The Undiscovered Country” (1991). Nimoy was in all of them, albeit briefly in “The Search for Spock.”

Nimoy also appeared as Spock in a couple of episodes of series spinoff “Star Trek: The Next Generation,” several videogames based on the property and the J.J. Abrams-helmed “Star Trek” reboot, playing Spock Prime to Zachary Quinto’s young Spock in the 2009 film and its sequel.

After directing several TV projects, including episodes of “Rod Serling’s Night Gallery” and his “Star Trek” co-star William Shatner’s “T.J. Hooker,” Nimoy signed on to helm “Star Trek III: The Search for Spock.” Variety said the production was “helmed with a sure hand by debuting feature director Leonard Nimoy, who also appears briefly but to good effect as the indestructible half-human/half-Vulcan Spock.” The review went on to say “Nimoy’s direction is people-intensive with less of the zap and effects diversions of competing films.” He went on to direct the next pic in the series, “The Voyage Home,” as well as four other feature films, including the 1987 comedy “3 Men and a Baby,” starring Tom Selleck, Ted Danson and Steve Guttenberg, and the Diane Keaton-Liam Neeson drama “The Good Mother” (1988).

Nimoy also had a long history of stage work. He appeared on Broadway in “Full Circle,” directed by Otto Preminger, in 1973, and as a replacement for Anthony Hopkins as Martin Dysart in “Equus.” In 1996 he directed “The Apple Doesn’t Fall Far From the Tree” on the Rialto. But he also starred in many regional productions — he played Stanley Kowalski in a 1955 Atlanta production of “A Streetcar Named Desire” — and starred in several touring shows: He was Tevye in “Fiddler on the Roof” in 1971, Sherlock Holmes in a play of that name in 1976 and Vincent Van Gogh in solo show “Vincent: The Story of a Hero,” which he also produced and directed, in 1978-80.

Leonard Simon Nimoy was born in Boston; his parents were Jewish immigrants from the Ukraine, and the language at home was Yiddish. He developed an interest in acting at an early age, first appearing on stage at 8 in a production of “Hansel and Gretel.” He took drama classes for a while at Boston College, and after leaving home to pursue his career in Hollywood, he landed his first lead role in the 1952 film “Kid Monk Baroni.”

After serving in the Army from 1953-55, he appeared in small roles in a few films, but mostly found roles in TV series, appearing in episodes of “Dragnet,” “Sea Hunt,” “Bonanza,” “Wagon Train,” “Rawhide,” “The Twilight Zone,” “The Untouchables,” “The Outer Limits,” “The Virginian,” “Get Smart” and “Gunsmoke” before rising to fame in “Star Trek.”

Most recently, he recurred on Fox sci-fi series “Fringe” as maniacal, genius professor William Bell, and he voiced Spock for a 2012 episode of “The Big Bang Theory.”

In addition to his work on “In Search Of…,” Nimoy lent his resonant, intelligent voice to a variety of films, TV projects and documentaries, including A&E docu series “Ancient Mysteries.”

He wrote two autobiographies. The first, published in 1977, was called “I Am Not Spock.” Though “Star Trek” fans thought he was distancing himself from the beloved character, Nimoy had always enjoyed playing the character but was also using the book to talk about other aspects of his life. The book features dialogue between the thesp and Spock and touched on a self-proclaimed identity crisis because he became so associated with his character. In his second autobiography, “I Am Spock” (1995), he embraced that association.

He also wrote several books of poetry, including “You and I,” “Warmed by Love” and “A Lifetime of Love: Poems on the Passages of Life.” Some of his poetry books featured his photos.

Nimoy studied photography at UCLA in the 1970s, and his work as a photographer was shown in museums, art galleries and in published works, including “The Full Body Project: Photographs by Leonard Nimoy” and “Shekhina.” He was active in philanthropy and endowed Hollywood’s Temple Israel’s Bay-Nimoy Early Childhood Center.

In music, Nimoy released five albums on Dot Records, the first of which was space-based music and spoken word, “Mr. Spock’s Music From Outer Space.”

Nimoy was married twice, first to actress Sandra Zober. They divorced in 1987. In 1988, he married Susan Bay, an actress who is the cousin of helmer Michael Bay.

He is survived by his wife; two children from his first marriage, son Adam, a director, and daughter Julie; a stepson; and several grandchildren.