Kerry Washington & Jimmy Kimmel on Getting Their Big Breaks (VIDEO) 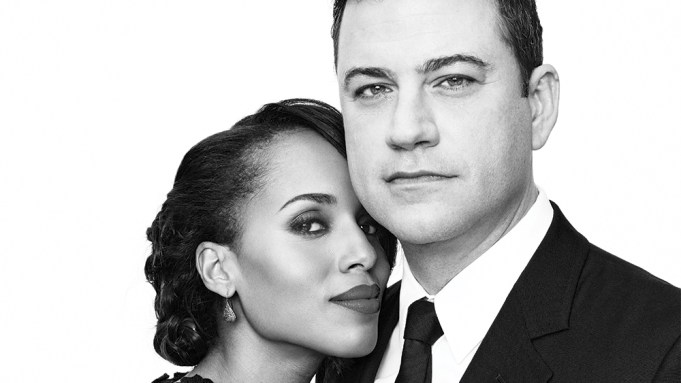 Kerry Washington has been a frequent guest on Jimmy Kimmel’s latenight talkshow. But when the two met at Variety’s Actors on Actors studio, she got to ask a few questions of her own — and they learned a few things about each other, including a shared love of those long-gone afterschool specials.

Jimmy Kimmel: Kerry, what was your first time on television?

Kerry Washington: My first time on television was an “ABC Afterschool Special” entitled “My Special Angel.” And I had to join SAG for that.

Kimmel: Were you the special angel?

Washington: No, I was in a supporting role as a cheerleader friend.

Kimmel: I miss those. I don’t know why they don’t do that anymore.

Washington: It’s crazy to believe that people grow up to be sensible human beings without watching afterschool specials.

Kimmel: They don’t! That’s the problem with this generation.

Washington: We should bring them back. We should produce them together. How about you?

Kimmel: I was on local television in Seattle. I was a radio disc jockey, and they would have the local radio disc jockeys toast some movie that had been seen too many times, so we were on in between the commercials. I remember it vividly. You know I watched it (recently) and I was stiff as a board, I had red glasses like Sally Jessy Raphael.

Washington: She was hot.

Kimmel: It was a great look for a young man. I knew it at the time, I looked at myself and I said, “I will never be on television, I need to make it on the radio, because clearly I’m not good at this.”

Washington: But did you want it?

Washington: Then how did it happen?

Kimmel: I don’t even know. People who made television shows would hear me and ask me to come in and audition. And most of the time they were disappointed and would send me back to radio. But eventually I got on a game show called “Win Ben Stein’s Money.”

Washington: Do you miss radio?

Kimmel: There are things about radio that I miss. It’s the immediacy of it. There are no meetings. The scripts are not that important. One of the worst things about it is waking up at 4 o’clock in the morning. Yeah, that’s fun. Especially when you have two little kids. You finish your shift, you go pick the kids up at daycare.

Washington: And then collapse.

Kimmel: Have you ever done radio?

Washington: I haven’t hosted a show, no. I’ve been a guest on radio and I liked it.

Kimmel: You’re too attractive for radio. They determine that.

Washington: I like when you’re doing press for a small indie movie, you do a lot of radio, like one of those grassroots campaigns. I remember for movies like “Last King of Scotland,” we did a lot of radio all over the country.

Kimmel: What is a question that you get asked you’ve had enough of answering?

Washington: Well, something I think is strange is that I think women always get asked the work-life balance question. And men never get asked that question.

Kimmel: You could look at it one of two ways. It is a bias against men, if you think about it.

Washington: It is! The assumption that you’re not involved.

Kimmel: Clearly you don’t care about your family outside of bringing home the bacon.

Washington: It’s such a traditional mindset.

Kimmel: I think people are probably genuinely curious about how it works for you, because it is something that is difficult to figure out.

Washington: It’s funny, but then I’m dying to hear the answer, because any woman who talks about it, I’m always really curious how she does do it, because it’s really hard.

Kimmel: Do you feel like being on a network television show puts you at a disadvantage in any way as awards go, as far as what you can do? I mean, certainly “Scandal” gets away with a lot.

Washington: Whenever we come across a moment in the script where somebody says “darn” or “shucks” I think it takes the audience out because you’re immediately aware that it’s not cable and you can’t say the real F-bomb. So we try to avoid those replacement words and express those feelings in other ways. And then I think the length of the season is so great, because you really do get to have these long story arcs and have long relationships with your audience. But I do think it’s more difficult to maintain that over 22 episodes than it is to maintain it over 12.

Kimmel: Yeah, that doesn’t get factored into the equation, the quantity.

Washington: I was so excited when Julianna Margulies won because she’s another person who’s on a network show and to be able to do that work, to sustain that work for the amount of time she does is outstanding and so beautiful.

Washington: How long do you think you want to do your show? Do you want to have a Johnny Carson kind of career?

Kimmel: Well, we’re in our 13th year. And no one will ever have a Johnny Carson career-length. Johnny was the only show there was and everyone was watching. You know now in latenight people have a tendency to catch up on other shows. But I don’t know — 20 years seems like a nice round number. But you never know. I mean, I’ll be around at least for a few more years. And then, we’ll see how it’s going after that.

Kimmel: Which of your roles do you feel changed your career?

Washington: There are some people who have that one thing that just catapults them, like the Jennifer Hudsons. But for me it’s been more like waves of opportunity. “Save the Last Dance” had a real impact on my career, and then “Ray” was sort of a different kind of access. And “Scandal” has been the biggest life-changer I think, just because of the beast that is television, the opportunity to be in a relationship with so many people because you come into their homes. They don’t have to leave their home and get into their car and buy popcorn.

Kimmel: There’s still something special about being on one of the big networks. Even though there are so many great shows that you can get at the push of a button, even though there are commercials in between, there’s something about being a show that people can find, that they don’t have to go look for. And then when that show becomes super popular, like “Scandal” has, it becomes part of the fabric of society.

Washington: I’m always blown away when I read the numbers of what happens in our business to imagine that that many people are tuning into any one thing at any time. I don’t think about it too much because I think it would paralyze me as an artist if I really thought about it.