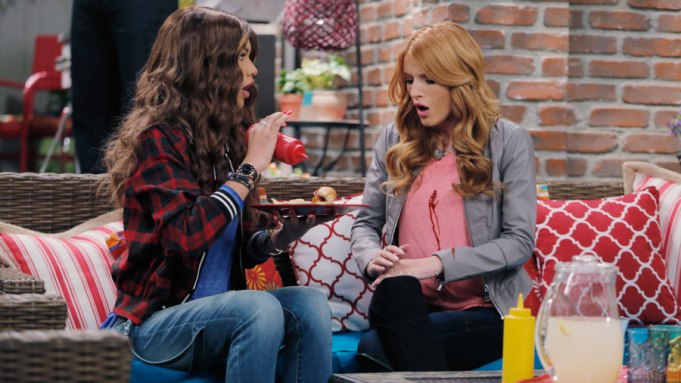 Disney darlings Bella Thorne and Zendaya, who co-starred on the cabler’s popular comedy “Shake It Up,” will reunite in an upcoming episode of Zendaya’s “K.C. Undercover,” and Variety has the exclusive first first look.

Thorne will guest star in the April 19 episode, playing Jolie, K.C.’s (Zendaya) brother’s (Kamil McFadden) smart and gorgeous exchange student girlfriend who K.C. believes is a spy. In the video (above), the duo is having a dragged out fight, which will be featured throughout the action-packed episode.

The weekend of special programming, kicking off April 17, includes new episodes of:

Starting April 13, “What the What” programming will be available on the WATCH Disney Channel app, with one new episode rolling out each day.

“K.C. Undercover” follows a high school student (Zendaya) in training to become an undercover spy, following her parents’ footsteps. Zendaya also serves as a co-producer on the series. She will host the Radio Disney Music Awards on April 26.

“Shake It Up” wrapped in November 2013, after three seasons on Disney Channel. Since, Thorne has co-starred in “Blended,” alongside Adam Sandler and Drew Barrymore, “Alexander and the Terrible, Horrible, No Good, Very Bad Day” with Steve Carell and Jennifer Garner, and most recently, “The Duff.” She is set to appear in MTV’s upcoming “Scream” series and Lifetime’s TV movie “Perfect High.”

Watch above for an exclusive sneak peek of Thorne’s “K.C. Undercover” guest episode with Zendaya.