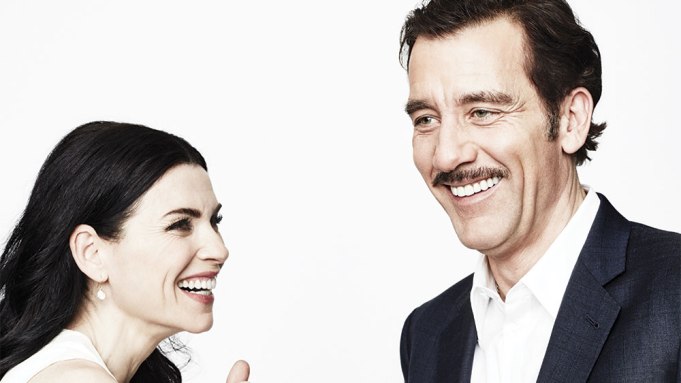 Julianna Margulies: What was the role that you feel suddenly changed your career?

Clive Owen: I landed a TV show when I was very young. I’m probably awful in it. It was called “Chancer,” which was very big at the time. And I remember it kind of rocked me. Coming from nowhere and being on this TV show with posters everywhere. And then, I did this tiny film “Croupier.”

Margulies: I saw it. Loved it.

Owen: It didn’t really get properly released in the U.K. But somebody in America loved it and championed it, and got it released, and it became a small indie. And it changed my career. It opened the door.

Margulies: Isn’t that amazing? Just one person. It just took one person to say, “No, I want to bring that out in America.”

Owen: So what was your big break?

Margulies: I was on a show for NBC called “Homicide: Life on the Street” that filmed in Baltimore. I was just visiting my boyfriend at the time in L.A., and I got a wee little part in a pilot called “ER,” where my character died. I got my ticket home, and George Clooney had left me a message on my machine. He said, “I think your character’s going to live; don’t take a job.” And I was like, how? I died during the pilot! Somehow they made me live.

Owen: Wow, so they liked what you did on the set and changed it.

Margulies: The way the director shot my death — my character commits suicide, or tries to. They did it all through George Clooney’s eyes, who had been my boyfriend. So suddenly my character got elevated to people caring about her. Because in a two-hour pilot, I had seven minutes of screen time.

Owen: Yeah, but you must have been good in it if they switched the ending.

Margulies: So I moved out to L.A., and that was a bizarre experience, too, because I had no idea, and it was a huge hit.

Margulies: What was it that got you, Clive Owen, to say yes to doing a television show?

Owen: Steven Soderbergh called me up, and said, “I’ve read the script (for ‘The Knick’), and I think I want to turn it into a TV series.” I’m a huge fan of his, but I wasn’t particularly looking to do television. I read that script, and 45 minutes later knew I’d be doing it, because the writing was so good.

Margulies: So you only read the pilot.

Owen: That’s all he had. And that first episode was one of the most original things I’ve read.

Margulies: Do you worry about keeping the audience on your side, on the character’s side? Ever?

Owen: No. I worry whether they will understand why I do something. But they don’t have to like it.

Margulies: I never worry about keeping an audience on my character’s side, because I feel like that’s what makes her interesting. But I try to make her human so that they can relate to whatever it is she’s doing, whether they agree with it or not.