Josh Gad, Justin Theroux on What Brought Them to ‘The Comedians,’ ‘Leftovers’ 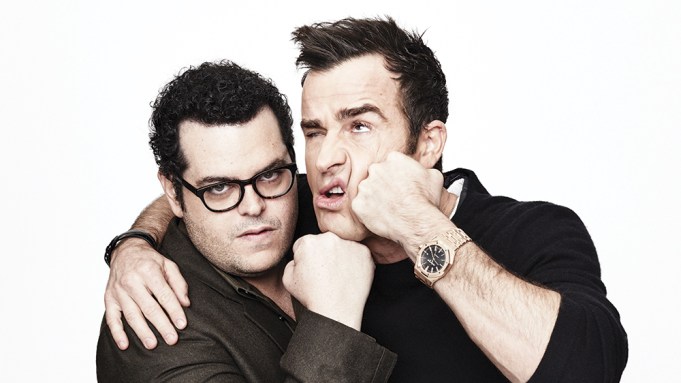 Josh Gad: So you got your start in theater too, right? Did you go to conservatory?

Justin Theroux: I did four years of drama school, and then I came out to L.A. and was terrified by it. Someone here actually gave me some sage advice, and said never come to L.A. unless someone’s paying for your plane ticket. So I did a bunch of plays in New York, and then worked with (Philip Seymour Hoffman). Such a beautiful, wonderful actor. We did a play called “Shopping and F—ing,” Off Broadway. And then started gradually getting more work out here, and coming out here.

Gad: I went to conservatory, and then about three years out, I was going back and forth between L.A. and New York. And there was a show called “The 25th Annual Putnam County Spelling Bee.” On a whim I went in. I had no musical theater to my credits other than high school. I wound up getting it, and that wound up being my big break. And as I’m sure you can attest, there really is no greater experience than eight shows a week to prepare you for the rigors of whatever you have to face in this industry.

Theroux: I agree. It’s the most exhausting — and people would think that it was not exhausting because you’re working two hours a day.

Theroux: We had talked about this once. I was saying it’s so much fun when you have a massive, enormous hit Broadway show, because your audiences are young and vital and amazing. And there’s nothing more depressing than when the New York Times gives you (a review): “Justin Theroux fares well; the play is clunky.” And you just watch your houses die the next day.

Gad: And then you’ve got to keep going back.

Theroux: You have to go back for another four months. I played a small part in “Three Sisters” on Broadway. It was an all-star cast, but we kind of got “eh” reviews. And we used to just hear the seats, they were sprung seats, so all throughout the play you’d hear (springs). By the third act, you’d look out, and you’d just see a wall of red velvet. There were no bodies in the seats.