Jimmy Fallon Explains Injury on ‘Tonight Show’: ‘Usually They Cut Your Finger Off’ 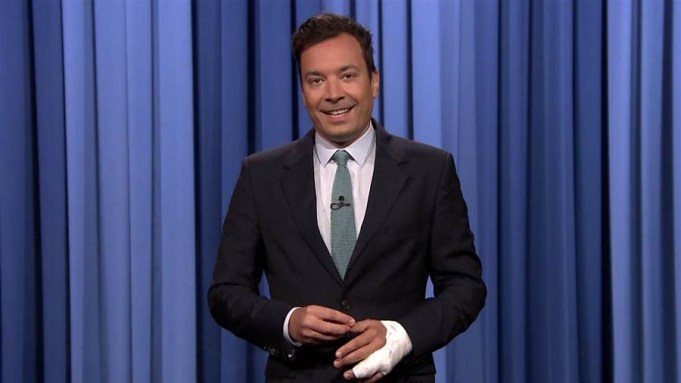 Jimmy Fallon made his “Tonight Show” return on Monday after a two-week hiatus, revealing the gruesome details of the hand injury that almost cost him his finger.

On June 26, the comedian tripped on a braided rug (“I can’t wait to burn it to the ground”) in his kitchen and caught his ring on a countertop as he fell. His finger was “sideways” when he got up, Fallon said. He was rushed to a New York City emergency room, where a microsurgeon treated his hand for “ring avulsion.”

“Apparently, the odds aren’t great and usually they cut your finger off, but this guy did microsurgery for over six hours and had to take a vein out of my foot,” Fallon said. “This is the craziest story — I was knocked out and didn’t know any of this.”

He remained in intensive care for 10 days and won’t get feeling back in the digit for eight more weeks.

Despite all the pain, Fallon said the experience made him realize that the meaning of his life is to be on TV and to make people laugh.

“I was watching TV and I was reading this meaning of life thing, and I think this is the meaning of my life,” Fallon said. “I belong on TV and I should be talking to people who are watching, who are either in an ICU or wherever you are, at home, or if anyone’s suffering at all — this is my job. I’m here to make you laugh.”