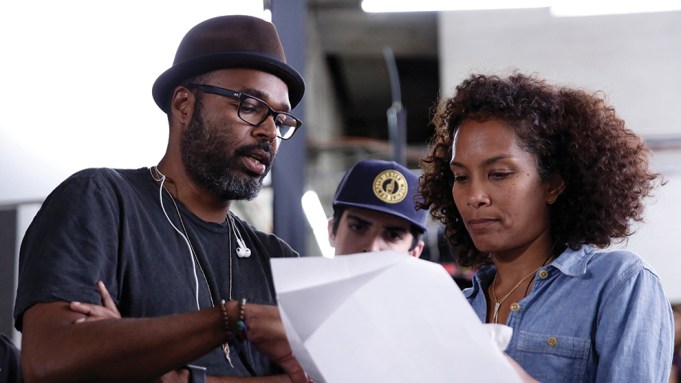 In a dynamic marketplace, a rising tide lifts all boats. And the tidal wave of television series production in the past few years has led to an unprecedented number of women serving as captains of their ships — as showrunners and auteur writer-directors of shows.

A host of shows that have resonated loudly in pop culture — from “Transparent” to “Empire” to “The Affair” — have women at the helm.

And Shonda Rhimes now has company on the list of women who are juggling multiple primetime series.

This sea change comes with financial gains, according to data from the Writers Guild of America West, and brings anecdotal evidence of shifts in the way series are made. But it’s not just the heightened demand for content that has been good for female creatives; a newfound openness to material, no matter how challenging or narrowly focused, has paved the way for shows with fresh themes.

The unglamorous setting of a women’s prison, peopled by a diverse clutch of complicated inmates, none of them nice and ladylike, fighting to survive? Bring it on. The success of Netflix’s “Orange Is the New Black,” steered by creator Jenji Kohan, has been a game-changer, say numerous showrunners.

“There’s such a demand for really unusual storytelling,” says Michelle Ashford, creator and exec producer of Showtime’s “Masters of Sex.” “That’s breaking down barriers to the kinds of shows that you would normally not see on television, and that has been really good for (female) writers.”

A romantic comedy about a divorced mom in her late 40s? A backstage melodrama about mostly despicable women who run a reality TV show? Those would have been hard sells even five years ago, says Marti Noxon, showrunner of Bravo’s “Girlfriends’ Guide to Divorce” and Lifetime’s “Unreal,” who’s also helping guide CBS’ upcoming medical drama “Code Black” as an exec producer.

“The idea in television for so long was that shows had to appeal to the broadest number of people — and then all these cable networks started developing their own shows,” Noxon says. “Girlfriends’ Guide” was Bravo’s first scripted series, which opened yet another avenue for femme-friendly concepts. “There have been a lot of complicated female characters in TV, but there were not many places where you could write nontraditional stories. They’re not doctors or lawyers or cops.”

“Women writers are finding television to be a place where they can explore very intimate and personal stories that tackle topics that are interesting to them,” she adds. “In the past, people would say, ‘That’s too small and too specific.’ There’s this odd confluence of things coming together at the same time allowing this to happen. All sorts of curious stories can find life.”

In the case of “Unreal,” the mandate to push the envelope came directly from A+E Networks’ big boss, CEO Nancy Dubuc. “Nancy came in and said, ‘I want an FX show for women and the men who love them,’ ” Noxon recalls.

While the boundaries of dramas are expanding, traditional half-hour comedies have been a tougher arena in which to break through for women showrunners.

Nahnatchka Khan, who calls the shots for ABC’s “Fresh Off the Boat,” which she created, says that working in writers’ rooms dominated by white men was a constant during her formative years.

“I couldn’t help but notice it, but it was also like just one of the rules — like you stop at a red light,” Khan says. Yet she’s seen a noticeable change in the past five years with the emergence of Mindy Kaling, Lena Dunham, Emily Kapnek and Jennie Snyder Urman, among others, atop series. On “Fresh Off the Boat,” Khan’s room is a nearly 50-50 mix of men and women, as was the roster of directors for the initial 13 episodes, starting with Lynn Shelton on the pilot.

“That wasn’t out of any agenda,” Khan says. “I just happened to love their credits, and the pieces all fell into place. Now we’re taking it for granted that more balance and more voices will make the comedy better.”

Yet there’s a growing sisterhood among showrunners behind-the-scenes, particularly for those still writing the early chapters of their careers.

Sarah Treem, co-creator of Showtime’s “The Affair,” reached out to scribes she admired for practical advice on everything from managing the pacing of a story arc to balancing her life as a wife, mother of a young child and showrunner. Her cold calls to “OITNB’s” Kohan, “New Girl’s” Liz Meriwether and “Party of Five” veteran Amy Lippman (now on “Masters of Sex”) were graciously received.

Mara Brock Akil, a comedy vet and creator of BET’s “The Game” and “Being Mary Jane,” says she has seen a rise in the number of female writers coming through her door during staffing season. But she feels it’s incumbent on showrunners to do more to identify and nurture young creatives who demonstrate the potential to run series themselves. “I think there’s a lot of talent out there that can get trapped in positions that make them seem like they’re not ready to take that next step into showrunning when they are,” she says. Overall, Brock Akil adds, she’s seeing a new level of entrepreneurial initiative in young writers eager to create their own Web series in addition to pursuing film and TV jobs.

It stands to reason that the number of women at the helm of scripted primetime series has never been greater because the airwaves have never been so crowded. Netflix, Amazon and Hulu have developed voracious appetites for original series, as have cable networks large and small.

The booming demand has yielded some 350-plus original scripted programs across cable, digital and broadcast outlets. It’s a seller’s market for writers with distinctive voices and showrunners with experience.

Television earnings by all Writers Guild of America West members grew approximately 39% from 2009-2014, according to the WGAW’s most recent financial report. The number of guild members reporting income from TV has spiked from 3,166 to 3,888 during that time. As of 2012, women comprised 24.2% of the WGAW’s roughly 8,400 active members.

Women working in TV are surely better off than many of those working in film. Female screenwriters on average earned a paltry 77¢ for every dollar earned by men in 2012, according to the WGAW report, or $61,776 vs. $80,000 for white males.

The WGAW does not break out employment statistics for showrunners specifically. In its 2015 TV Staffing Brief, the guild found that in the 2013-14 season, women held 15.1% of executive producer credits (not all of which are as showrunners) on series, or 136 of 457 exec producer credits. That was down noticeably from 18.6% in the 2011-12 season.

The guild’s survey of 2013-14 hiring encompassed 292 shows across 36 broadcast and cable networks. But even in just two years’ time, the volume of programming has grown markedly, across more outlets, and so has the stature of women.

Directing has been a focus for a new breed of multihyphenate showrunners, a la Lena Dunham with “Girls,” Jill Soloway with “Transparent” and Ilana Glazer and Abbi Jacobson of Comedy Central’s buzzy “Broad City.” There are also growing ranks of female director-exec producers who are not showrunners but have a consistent voice in the production, such as “Homeland’s” Lesli Linka Glatter. “I think it really deepens the storytelling” to have women more involved as directors, says Glatter, who earned an Emmy nomination this year for directing “Homeland.”

Julie Plec is a CW superhero who is spearheading three shows in the coming season: “The Vampire Diaries,” “The Originals” and freshman plague thriller “Containment.” Erica Messer is the “Criminal Minds” maven who is doing double duty for CBS in also running spin­off “Beyond Borders.”

Plec and Messer say there was never a discussion with their studios on whether they could handle the added workload. Instead the conversations centered on what kind of support they would need to make it work.

“Showrunning is similar to parenting” in many respects, Messer observes. “My perspective on (having two shows) is that it’s like having another kid. I’ve told the ‘Criminal Minds’ team: ‘So there’s this other thing that is going to take some of my attention. But I love you both. It’s going to be fine.’ ”

Multitasking and learning to delegate effectively are the nature of the beast for a showrunner. Having to do that times three should only sharpen those skills, Plec predicts. She’s juggled “Vampire Diaries” and “Originals” for the past few seasons; she also directed a “Vampire Diaries” episode last season.

“You have to understand that you can’t have your hand in every single detail any more in the same way you can when you’re a nice control freak with one show,” Plec says. “It’s been very good for my personality.”

By many accounts, it’s the skill at handling the managerial aspects of the job that makes the difference between a capable showrunner and a great showrunner.

Women often “come from a less top-down approach, and are more able to engage in the process of listening to the room to find the best idea, and guiding the story to that, rather than rigidly guiding it one way,” Chaiken says. “I think women do that naturally and more intuitively than men.”

“Affair’s” Treem has spent a lot of time thinking about the contrasting ways in which men and women approach the storytelling process — particularly given the premise of her show, a “Rashomon”-like look at an extramarital affair from the dual, man-woman perspectives.

“I think a female narrative has more circles around it,” Treem says. It’s not a straight line of a story, but one that has curlicues around it. I don’t think that’s accidental. It reflects the way women understand events as they are unfolding.”

With more women at the helm of shows, there is little doubt that the hiring hurdle for women, particularly as episodic directors, will decrease over time. Creating a working environment that is friendly to families is also a prime focus for showrunners with children. On “Unreal,” Noxon didn’t hesitate to hire a co-exec producer who was seven months pregnant, because she knew the scribe was right for the job.

“By making the show an environment where people can work and still take care of a family — that’s how women can help other women,” Noxon says. “You don’t have to stay in the writers room until 11 o’clock at night. If you’re doing that, you’re not working efficiently enough.”

The spread of women throughout key roles on so many shows is becoming so commonplace as to have become the new normal. Sometimes it takes an outsider to bring such progress into sharp focus.

“Masters of Sex’s” Ashford recalls a moment last year when a guest actress came up to her and exec producer Sarah Timberman with tears in her eyes after a table read. “We hadn’t really thought about it, but the writer of the episode was a woman and the director was a woman, and I was there and Sarah was there,” Ashford says. “The actress came up to us and said, ‘This is a miracle.’ ”

“The Affair’s” Treem has enjoyed a quick rise from her first staff position on a series, HBO’s “In Treatment,” to holding the reins of her own much-talked-about drama. The pace of change she’s witnessed in her short years in the biz has been remarkable, she says.

“When I was coming into the business, there was a feeling it was going to take another 100 years for women to get to a place that was anything like parity,” Treem says. “We’re not there yet, but I think it is truly a wave of change. I’m proud and excited to be a tiny part of it.”