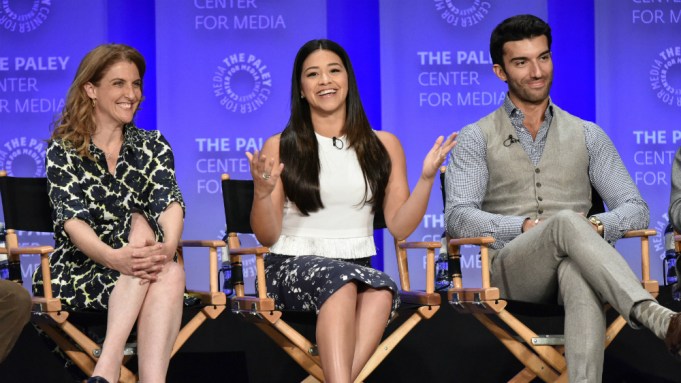 Image courtesy of Rob Latour for Paley Center for Media

When the “Jane the Virgin” cast took to the PaleyFest stage at the Dolby Theater on Sunday, the result was every bit as humorous, engaging and inspiring as quirky The CW show itself, touching on everything from star Justin Baldoni’s enviable abs to the ongoing struggle for immigration reform, prompting the cast to joke that they’d soon embark on a motivational speaking tour.

Golden Globe-winning star Gina Rodriguez kicked things off by eloquently discussing what the role of Jane meant to her, admitting, “Jane is a woman I wish I was more like… You seldom get the opportunity to even audition for a woman who is so strong and empowering and fearless and driven and a virgin.” Rodriguez pointed out that her parents are from Puerto Rico and speak Spanish and English, so she relates to relate to Jane’s dual identity and was eager for the chance to “talk about a culture that doesn’t get recognized as the hero.”

Andrea Navedo, who plays Rodriguez’s onscreen mother Xiomara, admitted that she found the characters instantly relatable too. “It reminds me of my own family… it’s very reflective of what you see on ‘Jane the Virgin,’ the interactions that we have, the fights that we have, the making ups that we have.” As the daughter of a single mother, Navedo praised creator Jennie Snyder Urman for shining a spotlight on single mothers and “how hard they work. And that is reflected through the Alba character and Jane character as well, what hard workers and how conscientious they are, how intelligent they are and loyal to their family… I’m so proud that I get to be part of that face that is reflecting a positive image to single women; single parents; Latinos out there.”

For Ivonne Coll, who plays Alba — Xio’s mother and Jane’s grandmother — the show has given her an opportunity to “represent the thousands of immigrants who come to this country, and work so hard to be part of the fabric of what composes America.” Because Alba is in the country illegally, the show had the opportunity to address the murky issue of medical repatriation and the devastating potential consequences that come with it in an episode this season. “Alba puts a face on the hundreds of thousands of illegal immigrants that are here that are are not criminals, that are hard working people,” Coll insisted. “There’s a lot of aspects of [‘Jane the Virgin’] for me personally that touch home and my heart.”

For Snyder Urman, “Jane” will never shy away from discussing such issues, which are “so central to the lives of the community that we’re representing.” While she conceded that some shows are over-politicized and can feel like they’re forcing the audience to take medicine when they’re spotlighting a specific issue, she wanted to address immigration reform and reproductive rights organically through the characters and their stories. “If you attach [yourself] to the people, like Alba — this woman who has worked so hard and here is her family — you’re attaching it to personal experiences, and you’re not preaching.”

“You’re humanizing the experience and not making it a them versus [us],” Navedo agreed.

Rodriguez pointed out that the show doesn’t aim to tell people what to believe so much as to promote conversation and encourage people to educate themselves on the issues that matter. “It’s about learning together… education is a means to wipe out ignorance, to wipe out intolerance… Jennie does a great job, not just talking about immigration, but same sex marriage, sexual equality, women’s rights, reproductive rights, without saying ‘it’s black or white, it’s yes or no,’ but more, ‘now talk about it. What’s your opinion?’ It doesn’t have to be ours, it can be your opinion. We can do it in a way that’s light and fun and funny and sometimes dramatic so it really hits home… We do with in our beautiful vehicle of art, and we do it in a way to actually create peace and tolerance through art, and that is awesome.”

A question from the audience brought most of the panelists to tears, as a young woman praised Rodriguez’s performance and asked Snyder Urman how she wrote such an culturally accurate world without being Latina herself.

“I set out to create very specific characters… the more specific you get with characters, the less they become stereotypical,” the showrunner explained, admitting that she has a far easier time writing a “24-year-old, driven, type-A woman who wants to be a writer” than writing for male characters, because she’s drawing from her own experiences. She added that part of “Jane’s” authenticity comes from “writing characters and writing people and not writing race, and understanding that [race] is one of many components that makes a character — their ethnicity but also their socioeconomic standing, how religious they are.” In addition to finding stories that everyone can relate to about simply being human, she noted that a big part of the battle was ensuring that she hired a diverse writing staff who had experiences that she didn’t have, and that she was able to ask the right questions of her writers and cast to ensure their story remained true to the characters.

Rodriguez noted that she’s seen how television networks and studios are starting to pay attention to diversity, given the recent success of shows with minority leads. “As an actress and as a woman of color I’ve been talking about this subject so much because it seems like such an algorithm, people are like, ‘how do we do it, how do we get into the Latino mind?!’ Like it’s different. I’m like, ‘is it different? because I don’t feel like my mind is different,'” she quipped.

Rodriguez had two tips for improving diversity on television, for both the networks and the audience: “One: you need to write for human beings — that goes for any underrepresented ethnicity. We’re human, we all want the same things, we all want love and success, we’re afraid of failure, we want people to like us… You write for a human being, that’s cracking the code, for any ethnicity… Cast the best actor and I bet you they will explode, that is what happens, cream rises to the top. Do not be afraid to do that and to branch out, if we’re talking about networks.”

She also urged the vast Latino audience to come together and make their voices heard, using the example of Fox’s most recent hit: “We can unite and get our viewership just like ‘Empire’ — ’cause where you at, 54 million plus?” Rodriguez laughed. “The Latino community here in this country is comprised of multiple cultures. So the industry says ‘let’s hire a Latino,’ and then the Latinos say ‘well, you want a Mexican and I’m Puerto Rican; you want a Guatemalan and I’m from El Salvador; you want a Cuban and I’m Dominican’ … We need to have the conversation; if they’re going to put us under one umbrella — now I’m talking to the Latino community in this country; that means your ancestors spoke Spanish, right? That’s what makes you a Latino? — if we want to be considered and we want to show and use our power to the fullest, we need to unite … They see us as one community and we need to be one community, because we all share the same struggle. That’s what we do as human beings — we celebrate each other, we celebrate each other’s culture, we celebrate each other’s religion, but we also unite as human beings. Let’s do that, let’s use our power as women, as Latinos, as whatever subculture you identify with, and at the same time celebrate being human. That’s what [Jennie] did — she wrote a story for a human.”

“Jane the Virgin” airs Mondays at 9 p.m. on The CW. Watch the full PaleyFest panel below: