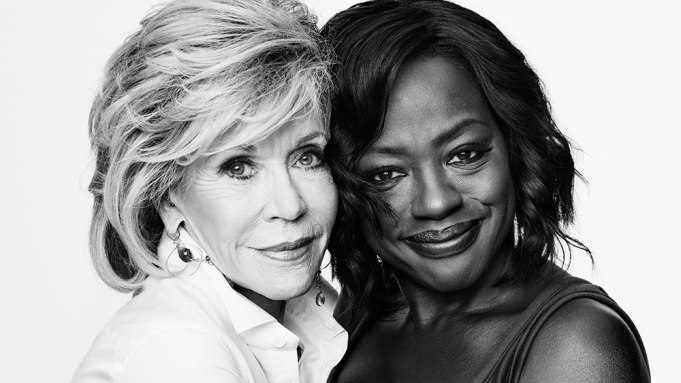 Jane Fonda: What is so interesting to me about movie acting and television acting — acting in front of a camera — is this combination of technical stuff like hitting your mark and where’s the light … and embodying a character. There are moments, and I can count mine on one hand during my 50-year career, when you hit the sweet spot. Where you’re doing all the technical things you need to do, and you’re embodying the character.

Viola Davis: Yeah, it’s like you’re in nirvana. I used to have more of those when I was younger.

Davis: I think because I didn’t know better, so I thought I was great. Now I have moments like that, but if I watch it, a lot of times I change my mind.

Fonda: What is your process? How do you get inside the skins of your characters?

Davis: I look for a real person that I can model the character after. Then I start from, “What is the character’s need? What drives them in life?” As soon as I figure that out, which takes me weeks, I’ve basically found the character.

Fonda: How much chance do you get to work with the showrunner to help develop the character and create an arc?

Davis: Well, Jane, I’m one of those actors that will call a showrunner at 3:00 in the morning.

Fonda: Oh, you’re one of those! Really?

Davis: I’m a Juilliard grad — they call Juilliard “jail yard.” Because it’s so strict, the discipline is kind of hardcore. But when I get a revelation, I’ve got to share it.

Davis: Yes. What about you?

Fonda: Well, I’m too scared of people being mad at me to call at 3:00 in the morning. But you know, I had never done episodic television before. I’d been a recurring guest star on “The Newsroom,” but doing it every day is very different. I didn’t realize you have a different director every episode. I didn’t realize you’re working sometimes 15 hours a day, and there’s not really rehearsal. It was much harder than I expected, and I just felt like I was in a learning mode. I think if we get a second season, I’m going to have more input. Because I think I understand the character better.