Continue to Variety SKIP AD
You will be redirected back to your article in seconds
May 23, 2015 2:34pm PT 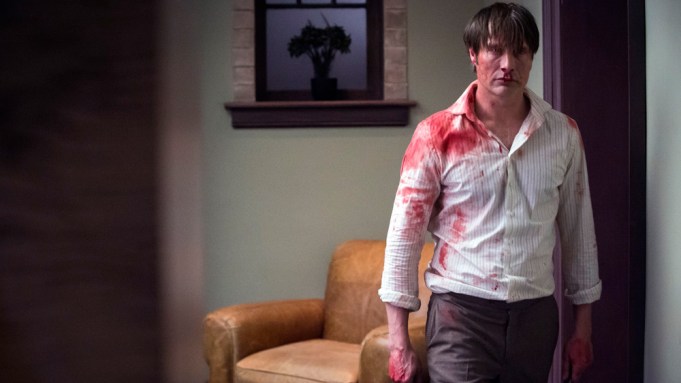 The upcoming third season of Hannibal opens up a whole new world.

A trailer and teaser for the new season offer a first look at Mads Mikkelsen’s and Gillian Anderson’s characters Hannibal and Bedelia after they’ve “ensconced themselves in contemporary Florentine society” as husband and wife.

The new videos depict a murder in progress that Hannibal seems to have committed to gauge Bedelia’s level of engagement. “Are you, in this very moment, observing or participating?” he asks menacingly as the helpless victim tries to crawl away.

“Bedelia, for the first time, is party to it,” Anderson says in the video, which also includes cast interviews with Hugh Dancy, Laurence J. Fishburne III and Caroline Dhavernas. “She could be as dark as Hannibal, but you don’t know.”

“She has a curiosity for the dark side of the world that she cannot run away from,” Mikkelsen adds in the video.

The trailer and featurette also reveal Richard Armitage as Francis Dolarhyde (the Red Dragon) in his tattooed glory.

The hunter will be hunted on June 4. #Hannibal https://t.co/jJg5HvpdOa