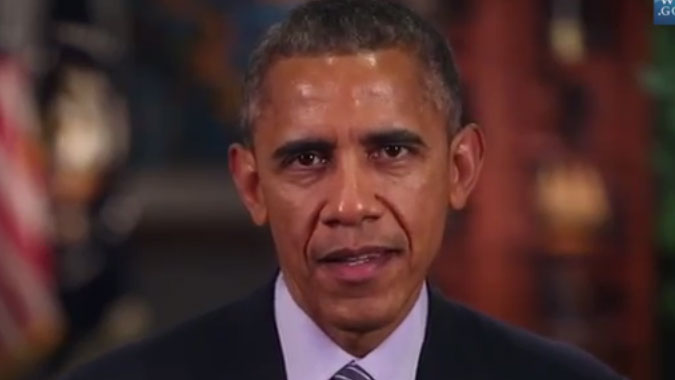 The Grammy Awards paused the celebration to deliver a strong message from President Obama about violence against women and girls, calling on artists to use their power to change public attitudes.

“It’s not OK, and it has to stop,” Obama said in a video that played at the Staples Center about halfway through the 57th annual Grammy ceremony on Sunday. He cited the disturbing statistics showing that one out of every five women have been victims of rape or attempted rape, and one out of every four women have dealt with some form of domestic violence.

“Artists have a unique unique power to change minds and attitudes, to get us thinking and talking about what matters,” Obama said. “All of us in our own lives have the power to set an example.”

Obama urged the assembled superstars at the Grammys to sign an anti-violence pledge at ItsOnUs.org, “and ask your fans to do it too.”

After Obama’s video, domestic violence advocate Brooke Axtell delivered a spoken-word piece before the hushed crowd, describing her experience with a violent relationship and her futile attempts to change her abuser’s behavior.

“My empathy was used against me,” Axtell said. “I was terrified of him and ashamed I was in this position.”

She called on victims to overcome their fears and seek help or shelter immediately.

“Your voice will save you,” Axtell . “Let it part the darkness. Let it set you free to know who you truly are.”

Following Axtell, Katy Perry took the stage to sing the ballad “By the Grace of God.”

The music biz has had its share of high-profile examples of domestic violence. In 2009, singer Chris Brown, who was nommed for a Grammy on Sunday, was a no-show for his scheduled Grammy performance after being arrested in connection with a violent incident involving his then-girlfriend Rihanna.