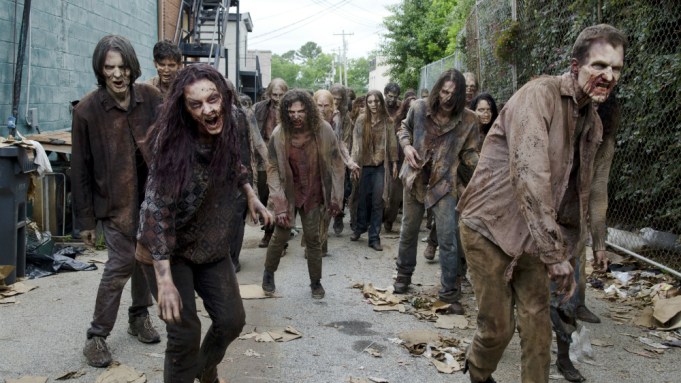 Spoiler warning: Do not read on unless you’ve seen episode 603 of “The Walking Dead,” titled “Thank You.”

“The Walking Dead” has never been afraid to kill beloved characters, but in the third episode of season six, the show seemingly ripped out the beating heart of its sprawling cast, sending Steven Yeun’s Glenn Rhee toppling into a crowd of walkers where he appeared to be torn apart by the bloodthirsty horde. Fans immediately began formulating conspiracy theories that perhaps it was Nicholas’ (Michael Traynor) entrails we saw being yanked across the screen, and “TWD” after-show, “Talking Dead,” poured more fuel on the fire when it neglected to include Glenn during the episode’s weekly “In Memoriam” segment, and aired a statement from showrunner Scott Gimple that said, “In some way, we will see Glenn, some version of Glenn, or parts of Glenn again, either in flashback or in the current story, to help complete the story.”

So is Glenn dead or alive? Was his apparent “death” a fake-out the likes of which the show has never attempted before? Variety spoke to executive producer David Alpert to try and gain some clarity on that, and learn what else is coming up for our remaining survivors in next week’s special 90-minute episode.

Let’s address the Glenn of it all up front, because I didn’t expect you guys to pull a Jon Snow on us at this stage of the game: Can you confirm that Glenn is dead?

[Laughs.] We will find out what happened to Glenn.

This show isn’t usually one to give us ambiguous deaths; and to me it seemed pretty cut and dry, just taking the episode as it was presented, without the context of the “Talking Dead.” From your perspective, what should we take away from that scene?

I think that part of what that scene is about is the violence inflicted on Glenn, but from a bigger perspective, I think it’s really about his interactions with Nicholas. There’s been a dynamic in the show since season one — the Rick-Shane dilemma — and what I love about last night’s episode is the fact that, watching Rick in the RV, he was Shane — that was not Rick from season one, that’s someone who’s gone full Bernthal. He wasn’t asking questions about who those people were outside his car, he picked up a friggin’ assault rifle and mowed them down without thinking twice. That Rick didn’t exist in season one … he’s really inhabiting that space, and Glenn has never gone there. And so in some ways, what I see last night as, he’s always embraced the kinder, better Rick, the one who believes in everybody’s humanity. He has forgiven and embraced and given Nicholas every opportunity in the show to do the right thing, and almost at every point along the way, has paid the price for it. I feel like, regardless of what happened to Glenn, he paid a tremendous price for having been human to Nicholas, and that, to me, from an emotional point-of-view — whether or not Glenn is alive or dead or something else — the Glenn that we knew, the one that believed in the better side of humanity, I think is dead.

That certainly seems to be one of the central tensions in the series as a whole, but specifically this season: how these survivors reconcile the need to survive with the desire to remain human. Will we see other characters struggling with that quandary this season, besides Rick?

Overall, yes — if you look at the conflict between the Alexandrians and our guys, I think it’s exemplified in that heated argument between Michonne and Heath, like, “you don’t know what it’s like out there.” And honestly, thinking back to what Sasha went through last season, and seeing what that was, you’re thinking, “life is pretty cushy in Alexandria — you really don’t know, and you should be thankful that you don’t know. But now that it’s at your door, you should really be thankful that you have these people with you.”

Michonne isn’t someone that vocalizes her feelings very often, so that scene with Heath had particular weight. She seemed eager to embrace Alexandria last season, but she’s also a very practical person, so how is she feeling about their position there at this point?

I think Michonne would consider herself a realist… by way of tangent, my father-in-law’s an engineer, he’s a scientist, so it’s like, the optimist says the glass is half full, the pessimist says the glass is half empty, and my father-in-law says you have a poorly designed glass, and I think to some degree you have that situation here with Michonne. She’s like, “no, there’s an amount of liquid in this glass,” and that’s a useful thing for her, so it’s not that that things are getting better or worse. There’s a place where there’s currently protection from zombies and people, and that’s useful for her, but I don’t think she looks at it and says, “yeah, this is the solution forever,” and I also don’t think she looks at it and says “oh this is a beacon for bad behavior.” She’s like, “this is a great place for me to rest my head right now.”

Daryl actually disobeyed Rick in favor of going back towards Alexandria in Sunday’s episode, although Rick doesn’t know that yet. How will his shift in priorities affect their dynamic moving forward?

What’s been great is that Daryl has been the most loyal, almost blindly loyal number two that Rick could ever ask for — he basically goes along with what Rick does. He’ll disagree, he’ll voice his disagreement and let Rick know his feelings, but also when Rick lays down the law, Daryl’s right there stepping up behind. And that dynamic between the two of them has contributed to their success; it’s allowed our group to survive when so many other people haven’t. And I feel like what’s been great about that has been… you have a trusted lieutenant so that allows you to get things done, but I also feel like it is time for Daryl to come into his own a little bit, even if that means conflicting with Rick. I was honestly, as a fan, excited that Daryl showed a little bit of initiative.

Much has been made of the ideological differences between Morgan and Rick this season, but last week we got to see Morgan and Carol’s differing approaches play out. Now that they both know what the other is capable of, where do they go from here?

That scene in 601 where she’s walking around with drinks and Morgan’s like “you always seem like you’re ready for something,” and she doesn’t know what to say, so she goes “aren’t you sweet?” It’s that classic Southern moment of “I’m going to be a gentlewoman here, but I really want to tell you to go f–k yourself; I just don’t know how to do it and still be civil, so I’m just gonna tell you ‘aren’t you sweet?'” It was that moment of, forgive the expression, game recognizing game. They looked at each other in that moment, and Morgan knew who she is, and Carol knew that he knew, so there was that moment of “okay, we’ll see how this thing’s gonna go.”

Ultimately, getting back to that Shane/Rick dynamic that was evidenced in season one and two, Morgan’s clearly embraced this humanist approach, and in the attack at Alexandria he really made some decisions that clearly have endangered the group, there’s no doubt about it. Those Wolves that attacked Rick, would they have been there had Morgan not let them go? Carol certainly wouldn’t have let them go, she would’ve straight-up murdered them, and not even thought twice about it. I think to some degree Morgan’s been there and back, so he’s going through some of what Rick did, but we haven’t seen the last of his evolution, for sure.

Next week’s 90-minute episode looks set to give us a glimpse into Morgan’s journey during his time off-screen — what else can we expect?

The most important thing is, Morgan is — if nothing else — incredibly smart. He’s capable, he’s confident, he’s thoughtful, but he’s very, very smart, so I think he understands the lay of the land as good, if not better, than anyone else, and I think he understands the implications of what’s just happened. There’s gonna be a fundamental shift in his worldview that comes out of this, but how that works is not a linear thing. This guy has been to nihilism and back, he’s explored the known universe of possibilities, but I think he’s about to encounter another one.

The past two episodes have thinned the Alexandrians out considerably. Now that some of the redshirts are out of the way, is this an opportunity for us to get to know the few who are left standing a little better?

Yeah, over the course of the season we’re definitely gonna learn a lot more about the Alexandrians and get to know them. Ultimately some of them are gonna rise to the occasion and become part of the core team, and others won’t, and like Sturgess and David and Annie will succumb to the ways of the world. [Laughs.] To some degree, the way our gang has survived is just by doing what needs to be done, and struggling with it emotionally and intellectually, but at the end of the day, they do exactly what needs to get done, and I feel like the Alexandrians haven’t been faced with that, and they’re going to be because the world’s not gonna let them do anything else.

Do you guys pay attention to fan reaction after big episodes like this? Are you sitting there reading the comments section and cackling maniacally to yourselves?

Everybody’s just been happy, I’ve been getting a lot of emails and messages, people telling me how thankful they are… [Laughs.] Yeah, no, I’m not the most beloved person when I’m walking out right now, but in a weird way, when people tell me they hate me for what happened last night, I take it as a compliment because it shows that they care, because I made a lot of other things that nobody talks to me about at all, so it’s nice when somebody cares.

We love our fans — the main thing is, we don’t listen to everything they tell us. We think that giving everybody what they want all the time isn’t the way to actually give them what they want. I have two children and if I loved them, they would eat cookies for breakfast and cookies for lunch and cookies for dinner, and that wouldn’t actually be what they’d want, because they would get stomach aches. You watch “The Walking Dead” because people you love die … whether you admit it, that is part of the reason you watch the show, so if we stopped killing characters you loved, you wouldn’t like the show anymore! So we embrace the outrage and the hostility as just another expression of love.