Continue to Variety SKIP AD
You will be redirected back to your article in seconds
Nov 22, 2015 7:42pm PT 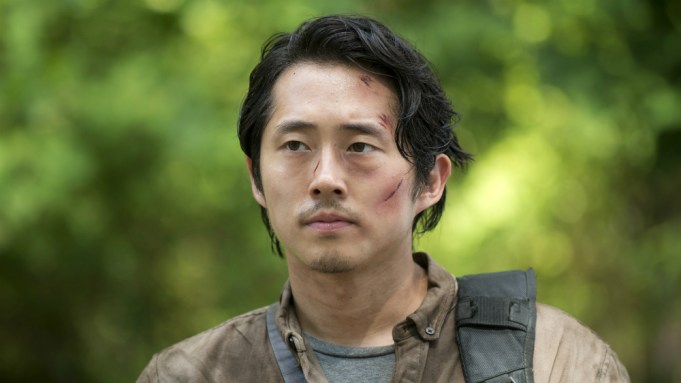 Spoiler warning: Do not read on unless you’ve seen “The Walking Dead” episode 607, titled “Heads Up.”

“The Walking Dead” finally revealed whether Glenn (Steven Yeun) is alive or dead after a month of speculation about the character’s fate, after he and Nicholas toppled into a herd of walkers in episode 603.

As the Nov. 22 installment revealed, Glenn landed beneath Nicholas, who provided a human shield for the fan-favorite character after they fell, allowing Glenn to crawl under a dumpster to avoid being bitten as the zombies surrounding them tore Nicholas apart.

Yeun appeared in a video message following the end of “The Walking Dead,” during the commercial break for AMC’s “Into the Badlands,” in which he thanked fans for their support over the past few weeks.

“I’ve been following everything you’ve been saying and it’s meant so much to me to see all of your support and concern for Glenn,” Yeun said during the video. “‘The Walking Dead’ has the best fans in the world and I’m happy to be back.”

Yeun and executive producers Gale Anne Hurd and Scott Gimple also appeared on “The Walking Dead” aftershow “Talking Dead” following the episode, where Hurd addressed the difficulty of keeping such a major secret. “It’s absolutely insane. People on the show have to sign non-disclosure agreements — in this case we literally said, ‘do you talk in your sleep?’ And if they said yes, we offered them some duct tape,” she laughed.

Yeun admitted he had to become a hermit to maintain the mystery: “I have not been out much. I frequent a lot of takeout and my apartment looks like a hoarder’s house,” he said before expanding on his earlier video message.

“I feel relieved — I feel very grateful. I feel so amazed at the response. I feel bad that I couldn’t say anything to everyone — family, friends I’m pretty sure I lost along the way,” he quipped. “It’s kind of been overwhelming, I don’t know how to take it all… I think it proves that this world still can take that story of the good guy winning sometimes.”

“The story we were telling was one of uncertainty; when people leave the walls, they don’t have cell phones, they aren’t rocking ’80s beepers. You don’t know what happens, you have no idea, when they leave, that could be the last time you ever see them,” he pointed out. “It was important this year to do a story about uncertainty, for the audience to share that uncertainty… Maggie didn’t know what happened to Glenn, and I wanted the audience to feel the exact same way.”

Yeun also revealed that Maggie’s pregnancy contributed to his decision to look after Enid this week. “The looming idea of fatherhood has definitely changed him, especially in the way he processes how much he wants to maintain his humanity. He’s searching for a place to pass on to his son or daughter,” he noted of Glenn’s desire to make Alexandria a home. “Last season, you saw a resolve in Glenn in really accepting what Alexandria was and could be for them.”

Hurd neither confirmed nor denied fan speculation over whether Enid might secretly be a Wolf, only teasing, “If you’ve read the comic book, there are some female characters who you’re not sure what side they’re on.”

Gimple admitted that they’ve been overwhelmed with the fan response to the Glenn mystery. “There’s just been a lot of it, and I think it’s wonderful. It is a dream come true to provide a collective experience, something that was around when I was a kid, which is you can talk to a stranger about TV,” he observed. “There’s been a lot of conversations about this and that’s exciting, it makes the world a little bit smaller.”

Yeun agreed, “I really like the idea that we can have that experience together… you realize in that moment that you have affected a lot of people at once and that’s something you don’t see that often anymore.”

Hurd said that she thinks Glenn has such fierce and enduring popularity because, “He’s still the guy, ‘hey dumbass, you in the tank’ — he’s maintained that purity that no other character really has. He’s been able to find love among the ashes. I think it’s that innocence that gives us hope in this dysfunctional world we’re living in.”