Continue to Variety SKIP AD
You will be redirected back to your article in seconds
Jun 10, 2015 10:00am PT 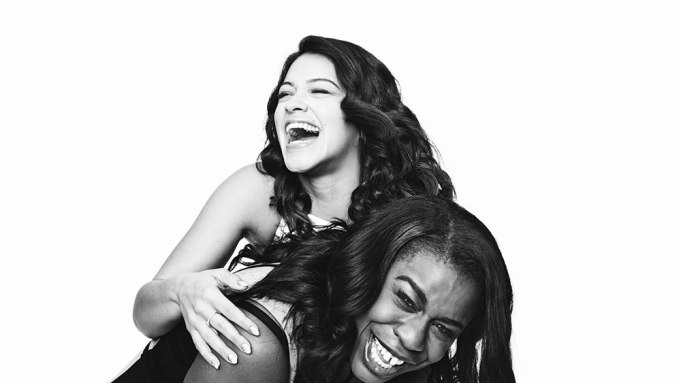 The following is part of Variety’s Actors on Actor Emmy Studio. For more videos, click here.

Gina Rodriguez: I’ve seen you for the past two years, and you’ve done such amazing things. You think about “overnight (success)” right? But it’s not. There’s so much leading up to it, so that when it comes, you can just appreciate it that much more.

Uzo Aduba: I one thousand percent agree with that. It’s overwhelming because it’s the work, the time, the love of the craft that went into making it. It’s a bigger story than my own.

Rodriguez: I love that you say “it’s bigger than my own.” Because it feels like it’s for so many that helped you get there, so many that supported you, so many that you haven’t spoken to yet that you know you’re speaking for, and hopefully giving a voice to. I see you do it every time I watch “Orange.” We get to do comedy and drama. What is that like for you, fusing them both?

Aduba: I don’t know a story that I have ever witnessed that didn’t involve both the high of comedy and the low of drama. I feel we’re really telling honest stories. How does it feel for you to be able to tell both?

Rodriguez: I give so much credit to Jennie Urman, my character’s creator. She is my muse. And she does allow me those ups and downs and that discovery and that exploration — that transformation as a woman. Everybody says, “Comedy is so difficult; how do you do it?” And you’re being honest. That’s where the funny is.

Aduba: I agree, I feel like that’s the heartbeat of it. And they write so well on our show that they’re able to make those transitions so seamlessly that you can understand why someone in this particular circumstance might be laughing one minute, and then another character might be crying the next.

Rodriguez: In a time that we’re talking about diversity so much, how blessed are we to be able to (tell these stories)?

Aduba: I feel so grateful that opportunities like this are being created. Because I think the only way an authentic story could be told is by inviting so many different groups. Jenji (Kohan) couldn’t do anything other than be honest.

Rodriguez: We went on a panel recently. Somebody asked (Jennie), “How is it that you can write for a Latina?” And she goes, “Well, I’m writing for a woman. You write a good story, you write for a human.”