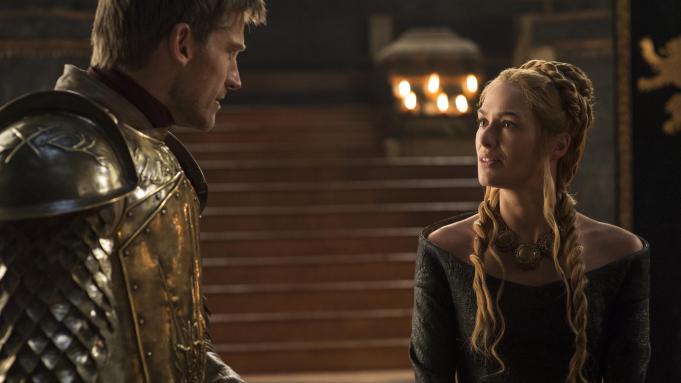 “Game of Thrones” made its Imax debut last night, and with it came the first trailer for season five, featuring old favorites and new faces as the battle for the Iron Throne rages on.

The trailer begins with Jaime Lannister keeping vigil over the body of his father, Tywin, in the Great Sept, following the Lannister patriarch’s death at the hands of his son, Tyrion.

Elsewhere, Tyrion has emerged on the other side of the Narrow Sea and catches up with Varys, who seems to be working towards Daenerys Targaryen’s return to Westeros so that she can claim the Iron Throne: “The Seven Kingdoms needs a ruler loved by millions with a powerful army and the right family name,” Varys observes knowingly.

“Who said anything about him?” Varys smirks.

Other shots visit Daenerys and her cohorts in Mereen, with Ser Jorah preparing for battle against an unseen foe; the ongoing war in the North with Jon Snow and Stannis Baratheon; Cersei Lannister plotting her vengeance against Tyrion; Sansa Stark still in the company of the manipulative Petyr Baelish; Arya Stark beginning her journey in Braavos; the deadly Sand Snakes — the illegitimate daughters of Oberyn Martell; and what could be the wedding of Margaery Tyrell to Tommen Baratheon.

New cast members for season five include Alexander Siddig as Doran Martell; Jessica Henwick as Nymeria Sand; Rosabell Laurenti Sellers as Tyene Sand; and Keisha Castle-Hughes as Obara Sand. Check out the gallery above for intel on the nine new additions.