Continue to Variety SKIP AD
You will be redirected back to your article in seconds
Mar 31, 2015 6:00pm PT 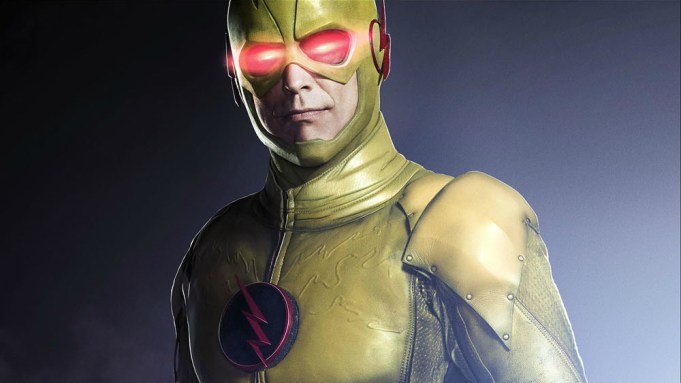 Spoiler warning: Do not read on unless you’ve seen “The Flash” Season 1, Episode 17, titled “Tricksters.”

If you thought you had Harrison Wells (Tom Cavanagh) all figured out after the STAR Labs founder admitted that he was Eobard Thawne — aka the Reverse Flash — in the March 17 episode of “The Flash,” this week’s installment arrived just in time to disabuse you of that notion, proving that Thawne still has plenty of secrets up his sleeve. In “Tricksters,” we were introduced to the real Eobard Thawne (Matt Letscher), who murdered Nora Allen before finding himself stranded in the past. This prompted him to instigate the car crash that killed Harrison Wells’ wife, Tess, before using a device to allow him to take on Wells’ appearance and leave the real scientist dead and withered, all so that Thawne could accelerate Wells’ development on the particle accelerator that gave Barry Allen (Grant Gustin) his super speed.

Elsewhere in the hour, Barry and Detective Joe West (Jesse L. Martin) revealed Barry’s secret identity as The Flash to Eddie Thawne (Rick Cosnett), Joe’s partner on the force, so that the trio could begin investigating who “Harrison Wells” really is, after Barry became convinced that his STAR Labs mentor was indeed the Reverse Flash.

To dissect the unexpected twists of “Tricksters,” Variety spoke to Letscher about portraying the real Eobard Thawne and what his arrival means for “The Flash” as it hurtles towards its freshman finale.

Just how shrouded in secrecy was this guest appearance?
Well, it was offered to me back in December of 2014, and I’ve been hermetically sealed in a vault in the ground since then. [Laughs.] No, I had worked with Andrew Kreisberg before, and I got an offer for the role and I spoke with him and he just said, “we want you to do this, we’re excited for you to do this, but you can’t tell anybody.” I did tell my family, my children, because my boys love the show — so they were excited about it, and then I forbid them from telling anybody else. So I had partners in my self-contained torture.

How did the producers describe the role to you?
I wasn’t really well-versed in the Flash mythology, so they basically laid out who the character was, and then they told me that it’s basically who Tom has been the entire season. I’d been watching the show so once I knew that, I was on board. I knew this would be a mindblowing revelation for people. Having worked with Andrew and Greg [Berlanti] before, and Tom, everything about the opportunity excited me, so it was an easy sell on their part.

Was it pitched as a one off appearance or with a potential to return?
He’ll definitely be back — I’ll be back this season. It was definitely pitched as something that they would like to develop in some way, beyond this year even, possibly. I’m especially interested to see what it does for Tom and his character on the show — I think it presents a delicious conundrum for fans and for the writers themselves on how they’re going to handle it.

Obviously, Tom technically originated the role of Thawne-as-Wells, so did you guys have any discussions during this episode about how to play him?
We mostly talked about how I was going to pronounce his name. [Laughs.] That was one of the big discussions. We didn’t talk too much; he told me a little bit about it, but once I had been told that that was what he’d been doing all season, I went back and I looked at a few episodes, watched his behavior — how he behaved in public versus how he behaved in private when he was talking to Gideon. I tried to take a little flavor from that and put it into what I was doing because he was doing it so well. But beyond that there wasn’t a whole lot of discussion, it was just “show up and have fun.”

How much have you been told about Eobard Thawne’s future within the show — in terms of the time he came from?
Bare bones. They have a lot of possibilities — if you’re just going from The Flash’s own history as a storyline, you have a lot of different possibilities you can choose from in terms of how you want to develop Eobard Thawne or Professor Zoom or whatever you want to call him. I think they’re still sorting some of that, about how they want to look at him in the future, so I just got the bare bones of “this is where he came from, this is where he has to get back to, this is what he has to do to do it.” So I chose to focus on that this season.

Were you given any insight into how the existence of The Flash has shaped Thawne as a character and his motivations?
Yes, to some degree I was pointed in that direction, but I think until they figure out how they want to sort that out in future episodes, they weren’t too worried about that. They wanted me to stay in the present and what the present problem was, which was “I gotta get the hell out of here.” [Laughs.]

People seem to geek out when they get to try on iconic superhero costumes — how did you feel about donning the Reverse Flash’s yellow suit?
I geeked out like crazy, I definitely did. I also thought I should immediately join a crossfit class. But it’s one of those special moments, one of those Hollywood moments where you’re getting to put on this superhero costume in the middle of the night in Vancouver and scream and yell and do crazy stuff. I just thought “This is the kind of thing I’ll remember when I’m 8 years old in a retirement home somewhere, that I got to be the Reverse Flash.”

Did you do any back-reading with some of the classic DC Comics as preparation, or did you just decide to stick with whatever was on the page?
Yeah, Andrew was pretty clear on that — I was doing research in that regard and Andrew said, “you don’t need to worry too much about any of that, because there’s so much there, and so much of it isn’t useful for what we’re doing right in the moment. So I did enough to know just how rich the history was for the character, and when it came to actually doing the work it was just, “focus on the script, make sure I’m up to date on what the story has been in the season so far, and then devote myself to what’s happening right now.”

I know that there are many generations between Eddie Thawne and Eobard, but you do definitely share more of a resemblance with Rick than Tom does, if only in hair color, so that felt like kind of a lightbulb moment: “aha — they’re both blond!”
That’s another thing — I have no idea how they’re going to sort that out, in terms of where I fit in with [Eddie] and what that means for the future of the show. But it does explain the blondness. [Laughs.]

As a fan of the series before you were cast, what has been the best part of joining the show?
I love working on Greg’s shows and Andrew’s shows because this is a show about metahumans, but what the show gives equal weight to is the human part of them; their emotional lives; what it is that’s motivating them beyond just being given these special powers. These are people who are thrust into a situation where they’re given something extraordinary to do, but they’re still very much human beings trying to sort their way through the complications of that situation. And I love how [Greg] plays on both sides of that. To join a show that has that as its face, and to be working with such great actors… Grant has been doing such a good job, he has such a lovely presence, he handles things with aplomb and Tom Cavanagh, who I’ve worked with before and watched his work this year, I feel like he’s done really great work and you just know you’re signing on to quality across the board. As an actor, there’s nothing else you can ask for.

What do you think of the revelation that Eobard Thawne transformed into Harrison Wells, and how do you think Letscher will tie into the series going forward? Share your theories in the comments!